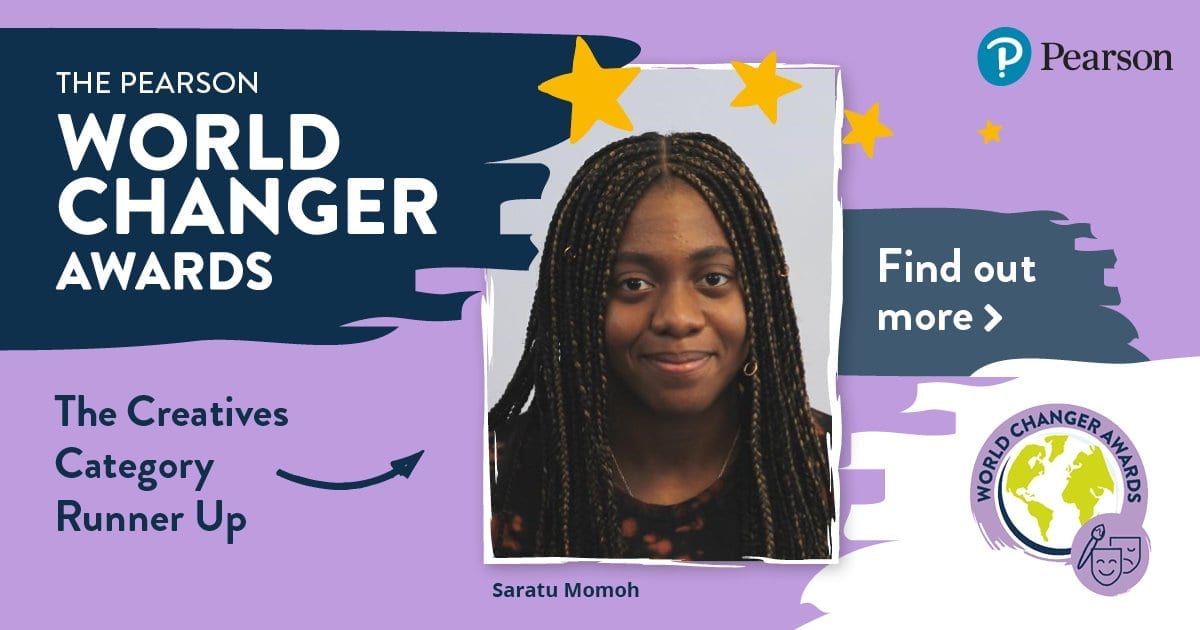 A 6.2 student has been announced as runner up in ‘The Creatives’ category for Pearson’s prestigious World Changer Awards. Pearson is a British-owned education publishing and assessment service to schools and corporations, as well for students directly. And according to Pearson, the World Changer Awards were designed “to highlight the power of education and demonstrate how subjects across the wider curriculum can help drive positive change in the world. “At Pearson, we know learning does not end in the classroom. What is taught in schools, homes and communities can unlock a world of experiences and opportunities, as well as harness the talent, passion and kindness needed for the future.” Sixth Form student Saratu, who hopes to study Economics and Business Management at Kings College London next year, was the recipient of the runner up award for ‘The Creatives’ – a category based on changing the world through creativity, expression and perspective. As part of her Extended Project Qualification (EPQ), Saratu submitted a performance video of spoken word and an accompanying document, based on racial equality. She said: “The spoken word piece was about 7 minutes in length, but the research and writing processes of my EPQ have take almost a full year. “My inspiration came from when I read a book, titled The Little Rock Nine: Struggle for Integration, by Stephanie Fitzgerald. Then, it was my EPQ coordinator, Mr Kokkinos who persuaded me to give the submission a try – and he pointed me to various sources for my research. “I also had the support and constructive criticism of my friends, on the craft of my spoken word.” Judges included a combination of ambassadors and partners from a range of backgrounds, such as teachers, business-owners, entrepreneurs, authors, campaigners and explorers. As a runner up, Pearson stated Saratu demonstrated that “she is taking her learning to the next level to make a positive and tangible impact on the world.” Judges added: “Despite the challenges of 2020, we have been moved by the resilience, positivity and dedication to make a difference beyond the classroom that has shone through in the applications we’ve received across the UK. “Saratu’s is passionate about racial equality and has been using the power of performance and spoken word to share her views and experiences in her school and beyond. “She has spent over a year personally researching the Black Lives Matter movement and injustices across America and Britain and is committed to studying this further and driving change through activism and campaigning when she goes to University next year. World Changer Awards Ambassador, Ann Daniels – Polar Explorer and the first woman in history to reach the North and South Poles as part of all-women teams, added: “As the winners and runners up show, children and young people are so amazing and able to affect real change. They are the future.” Reflecting on the award, Saratu added: “I am very pleased that I had the opportunity to take part; it was very exciting as I didn’t expect to be a runner up. “Taking part has allowed me to understand that it is good idea to get out of your comfort zone once in a while and pursue your passions.”