Celebrated once every year, the Mid-Autumn festival is a highly regarded event for Chinese people around the world. To commemorate such an important time, Hong Kong society has an annual tradition of celebrating said event through supplying mooncakes and providing activities. This year, Hong Kong society, run by Chester, Maggie, Kenneth, and Charmaine, purchased mooncakes from Hong Kong and brought them to Concord College to distribute within the Hong Kong Concordians. To our delightful surprise, more than 100 people showed up at the meeting spot for Hong Kong society, leading to a cheerful and warm atmosphere.

During the event, the presidents of the society distributed the mooncakes equally among the members and provided glow sticks to brighten the mood. People smiled and cheered as they took a bite of the sweet custard mooncake and had joyous laughter among each other. To commemorate and end the day, we took a group photo of Hong Kong as shown below.

“It was very nice to finally meet everyone in Hong Kong society after the Covid regulations have been removed. I hope everyone who went to the event enjoyed the mooncakes and had a good time.” – Charmaine 6.2

Homesickness is the feeling that every Concord student will have the heart-wrenching pleasure of experiencing from time to time. Between looming exams and extra-curriculars, as well as the myriad of other roles and commitments for us to fulfil from day to day, there are usually enough things going on to keep this feeling locked away. However, a time of year where the homesickness comes in droves for a significant portion of students here, myself included, is Lunar New Year. This is normally made far worse due to us being tormented by posts and stories on social media of the festivities back home, wherever that may be. Videos and pictures of our friends at home enjoying delectable goodies, dressing up in new (traditionally very red) clothes, and spending time with loved ones, can almost be enough to make you wish you were at home, instead of studying for that upcoming Saturday test.

Perhaps one of the most universally traditional Lunar New Year customs amongst those who celebrate it, however, is the annual reunion dinner, where family and friends come together in order to enjoy each other’s company and celebrate the holiday, all while eating both sumptuous and symbolic foods (for example, eating fish represents prosperity in the new year). In order to somewhat remedy the ‘FOMO’ (fear of missing out) that naturally comes this time of year, Concord makes an effort to bring the spirit of the holiday to England. The biggest way in which they do this is to organise a massive Lunar New Year dinner in Birmingham’s Chinatown, for all students who wish to take part. Were it not for this school being kind enough to do this, the closest thing most of us would get to celebrating the holiday would be the care packages of Lunar New Year snacks that some lucky students get from their families, which are often reduced to empty boxes by all their friends as soon as they are opened.

Thus, on Saturday the 25th of January this year, which was indeed Lunar New Year’s Day, over 200 students piled onto a total of six coaches bound for Birmingham, to celebrate the cultural holiday. After a day of shopping in the Bull Ring in Birmingham, we all eventually made our way back on the busses to head to the venue. The function room at the event was filled with enough tables to seat the large fraction of the school that attended, and was well-stocked with enough food to satisfy the couple of hundred hungry teenagers. Despite the large number of dishes that were served, including chicken with bean curd skin, a whole steamed fish to each table, and a free flow of fragrant steamed rice, little to none went to waste on our table, with my friends and I quickly picking apart each dish, often to the literal bone. As I looked around, it was evident that the same was the case for many other tables around us.

Quite apart from the nostalgic and comforting nature of the event to those who would otherwise feel left out of the New Year festivities at home, it was a wonderful opportunity for those students (and indeed teachers) who would not normally celebrate the holiday to experience a slice of a different culture, which ultimately ties back to the spirit of Concord and its international community. Following a stirring and wonderfully bilingual speech from members of the Chinese society, I feel that I can speak for many people who were present on the day when I say that it was a fantastic time for everyone, regardless of whether we normally celebrated the holiday or not. 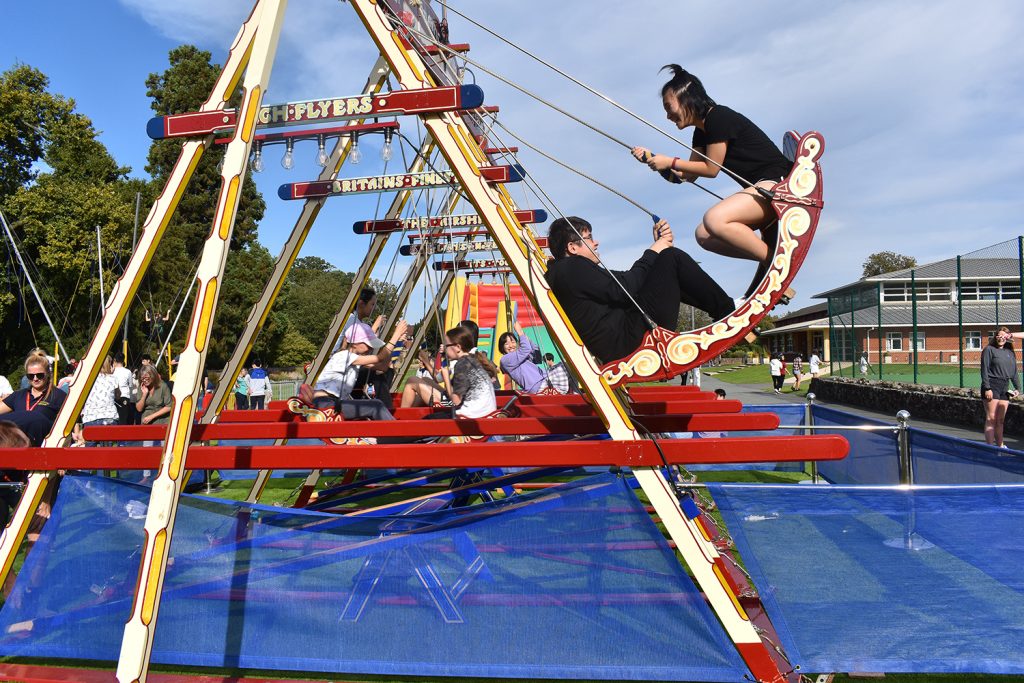