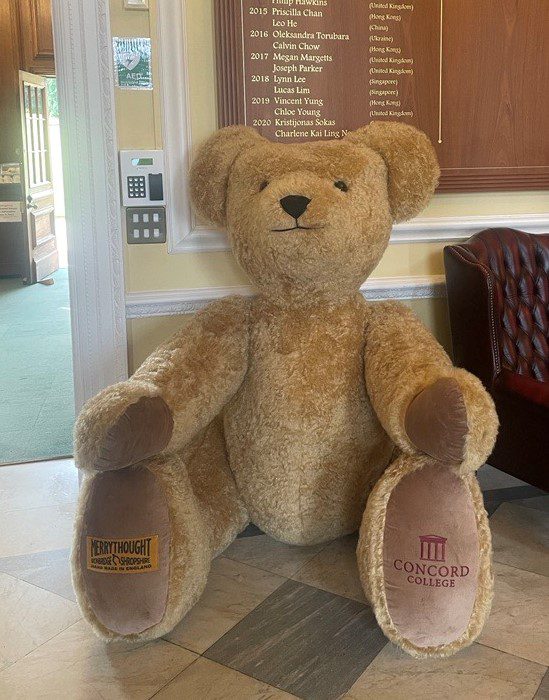 As students and staff arrived at Concord after the summer they were met by an unusual new team member; a giant teddy bear, weighing over 70kg and measuring 1.5m tall when seated. Concordians are used to teddy bears. For the last few years those graduating from the Sixth Form have received their own Concord bear and a collection of all the graduation year bears is displayed in a large cabinet in Main Hall. The graduation bears have become an important tradition, as Concord’s Principal, Dr Michael Truss explained: “Our graduation ceremonies are big, important events – and rightly so. They are the point at which all the hard work of our leavers is acknowledged and celebrated as they leave Concord for the next stage of their lives. With so many talented and brilliant students there is much to celebrate and we wanted to give leavers something that they might just hold on to for years to come.” The idea of having a much larger cousin of the graduation bear to greet students and feature at various college events was first discussed last year. When considering a larger symbol of Concord’s community values, Dr Truss reflected: “At the beginning of the summer, I was talking to some recent leavers and the conversation turned to symbols or mascots used by schools and universities. Concord doesn’t have a mascot, we don’t name or brand our sports teams, for example – and I asked the question, “If Concord were to pick an animal as our mascot, which animal would it be?”. “I was expecting a range of answers, though it has always made sense to me that if we had such a thing, it might be an owl; wise and majestic, or something quirky and hard to categorise, a platypus, perhaps. But no. The answer was rapid, and it was unanimous: “Well obviously it’s a bear!”. “When pushed for a reason, more surprises revealed themselves: it’s a bear because bears are strong-willed, independent yet thoughtful – like Concordians. It’s a bear because a bear is a very reassuring animal and the most reassuring of all bears is a teddy bear. For students who spend significant fractions of their educational journey a very long way from home, suddenly the deeper significance of the Concord bears makes sense.” Our giant bear was made especially for Concord by the amazing people at Merrythought, who have been making exceptional teddy bears (and other animals) just 8 miles from here in Ironbridge since 1930. Famous worldwide, they made the official Olympic bears for the 2012 Olympics and the Edward Bear for the film “Goodbye Christopher Robin”. They are also commissioned to produce exclusive Royal Baby teddy bears for the Royal Collection Trust, operator of the official Buckingham Palace Shop, with number one of each limited edition being gifted to the respective Prince or Princess! Merrythought’s smaller bears are collected all over the world, but there have only ever been a few giant bears like ours, making it even more special. What “Bear” was missing, however, was a name and naming them became a task that Concordians took up with enthusiasm and creativity. Over 70 suggestions were received and eventually “Bear” has become “Burnell”, named for the village of Acton Burnell in which Concord is located. The college’s new “Ambassador”, as their staff lanyard describes them, has been warmly received by students and staff alike, and there are already numerous pictures being shared of Burnell being hugged. Burnell will be around Concord for many years to come, welcoming everyone into our community, popping up at events and being there for a hug if needed. Watch out for them in our social media posts #BurnellBear too.