‘Home’ is such a simple, yet satisfying word. The noun itself is associated with comfort, ‘a state of physical ease’, which is precisely how I felt during the ‘Recent Leavers Reunion’ on the 10th of February. It was a rush of the familiar:  the Head Girl of 2014/15 who had welcomed me into the embracing walls of Concord, the squad of 2016 who taught me that confidence was everything, the boy – now man? – who never seemed to leave the stage throughout my form 4 and who I aspired to be like. I walked round the sports hall – which had been transformed into an astonishing disco (imagine a regular disco, then add more disco balls, a stage which lights up, elegant couches and cotton candy… Yes, cotton candy) – and hugged everyone I could remember, and then anyone I couldn’t. When I finally got on the stage to dance, it was exhilarating; it felt as though we were all extensions of one body, simultaneously pulsating to the beat. Except, of course, it was more like a mass of energetic, although mostly off-beat, moves accompanied by elated smiles and constant uproars of laughter.

However, despite all the familiarity, change was apparent. For one, the number of unusual hairstyles was incredible; once long, brown, straight hair was now a wavy bob of peach. I heard hilarious stories about the benefits and drawbacks of university, the affordances and constraints of a gap year and unsurprisingly frequent reiterations of ‘I miss Concord’, and ‘enjoy it while it lasts’. I saw couples who had begun their relationship in Concord, and new ones who ended up in the same university, and the – in some cases, only – connection which we all shared, the constant of it all was of Concord itself. Although ever-changing in size and technology, the Concord community is still as welcoming as ever, and the joy is nearly palpable.

Sometimes clichés say it best: home is where the heart is, and once a Concordian, always a Concordian.

At 9:45pm, masses of students, graduated and current, huddled around the tennis court and main hall waiting for the fireworks to begin. The anticipation was bubbling in the air as lights flickered in the darkness. A flash of firework following a loud whizzing sound broke the peace and soared across the dark night sky. Immediately, cheers and laughter erupted. Colours exploded through the air, filling it up like paint on canvas. ‘Oohs’ and ‘ahs’ followed each amazing act with sudden bursts of cheers and applause.

The Concord College Reunion happens every two years and is considered to be one of the best events at the school. New students get to enjoy the fireworks and fun disco while old students reunite with their friends and enjoy another ‘Concord-style Saturday night’, which quite frankly, are some of the best nights in our lives.

The firework dispay ended with the words ‘CONCORD REUNION 2014’ glittering silver with a fan shaped waterfall of golden sizzling fireworks in the background. Students started flowing into the sports hall, which was filled with the smell of sweet cotton candy and chocolate. Music boomed from the speakers and trembled the floor. Through the smoke and the fluorescent lights, the dance floor was transformed into a 80s disco. The Cowboy Wild West themed night was very popular as the staff dressed up as cowboys and cowgirls. Sideshows orientated around the Wild West theme, including games such as a quick draw shooting gallery, milking cows and riding the bucking bronco. Students crowded around the chocolate fountain and queued up for the photo booth, others jeered and laughed as brave volunteers were thrown off the machine bull.

By the end of the night, the dance floor was overcrowded with students and some had resorted to dancing on the edge. Sadly, the night couldn’t continue on forever. When the clock struck twelve, Mr. Kerslake kindly reminded us of room check, students began unwillingly drifting out of the sports hall in twos and threes, saying their goodbyes at the door as graduated students walked to main hall to catch the school bus to Shrewsbury.

The Reunion at Concord College is a great chance for old students to relive their Concord days and reunite with their friends still in school. More importantly, it allows fellow students to communicate and helps new students see and hear about the challenges the future may hold. The Reunion was one of the best nights I have ever experienced at Concord, and seeing the looks in the old students’ eyes, I know I will be looking forward to coming back to Concord in the future and cherish the days I get to enjoy now. 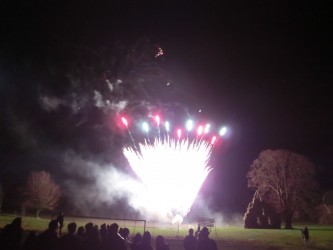