A Moment of Darkness

A Moment of Darkness

On Saturday 16th March, just after sunset, the Eco Club brought to Concord College, Earth Hour. The main purpose of the event was to spread awareness about climate change, the effects of our day-to-day consumption on our Earth and the #connecttotheearth movement. Attendees were expected to switch off lights and personal electrical appliances in order to support the cause.

The event took place in the West End and included about 11 performances ranging from revealing fun facts about the Earth to poem recitations and musical presentations. The West End lights were turned off and the place was lit only by candles, setting the tone for the night. Performances were unplugged as performers made no use of microphones or instrumental backing tracks in order to enhance the eco-friendly atmosphere.

Earth Hour originally started in Australia as a ‘small lights movement’, but then grew internationally becoming one of the biggest grass-roots movements in the world. The actual (official) Earth Hour is on the 30th March and we are encouraged to turn our lights off for an hour in order to reduce light pollution and minimise energy consumption, so don’t forget to turn your lights off to help Mother Nature!

Organised by the Eco Club on 16th of March, the candle-lit ‘Earth Hour’ event was held at Concord’s West End, inspiring Concordians to do their part in saving the planet, simply by turning off their lights for an hour. The ‘lights-out’ event was made vibrant and entertaining by the talent of our fellow Concordians, who delivered an unplugged, hour-long performance of acoustic music and poetry.

During the event, students performed acoustic covers of well-known songs and recited touching poetry in the dim yet warmly illuminated setting. A variety of talent was exhibited during each five-minute item, and the performance would not have been complete without the audience’s support and encouragement. Concordians cheered their fellow schoolmates on by waving along to the acoustic song covers and chanting their names. One of the most significant pieces during the event was a poem about the impacts of global warming, and how it would be greatly reduced if we play our part in saving the environment. At the end of the ‘Earth Hour’, the Eco Club committee performed a song cover and encouraged everyone in the audience to sing along with them, ending the event on a light-hearted note.

The theme of Earth Hour 2019, ‘Change the Way We Live’, was emphasised during the symbolic event. Ultimately, each of our individual contributions can make a significant difference to the preservation of our climate. By attending the concert, not only were we able to appreciate and enjoy the performances and the talent of our fellow Concordians, but we were encouraged to think about the purpose and impact of ‘Earth Hour’. We were moved by the fact that playing our part for one hour made a substantial difference in energy consumption around the world, helping to improve our environment and saving our planet.

“Let us stand together to make of our world a sustainable source for our future as humanity on this planet” quoted by Nelson Mandela.

An event with more than 6,950 cities and towns, across 152 countries and territories participating, Concord College was not an exception. Just a week before the end of term exams, members of Eco Club sacrificed their hours of revision time to organize this wonderful event. Not only did it generate opportunities for students to shine, it also gathered over 100 people under a warm and fragrant atmosphere. West End was enchantingly transformed into a Brighter World on the 23th March, 2014. Exclusive song compositions from students were sang, drum beats were dropped, freshly made snacks were nibbled. Nevertheless, the Treasure Hunt was the highlight of the night! Congratulations to those students who managed to turn the West End upside down to find those Easter Eggs. Hope they will spend their 10 pounds Asda gift cards wisely. Earth hour has implicitly created a lovely break for restless students to leave their books behind for some fresh air. Within a light-less and only hour of time, we managed to save a certain amount of electricity as all the students rallied together and put their hands together. It was such an accomplishment when everyone was striving for a better and more sustainable future as our ultimate goal. 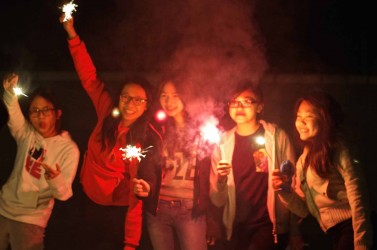