It has been a very eventful week for the 6th form students, with an array of exciting activities such as orientation games organised by the 6.2 prefects (following the themes of Harry Potter, Game of Thrones, Lord of the Rings and Percy Jackson), high-ropes activities and self-defence training. What I enjoyed the most was welcoming the new students the moment they made their first steps into Concord College, as I was glad and excited to see the new faces who will be joining us for the next few years. It was very heartening to see many friendly students getting to know one another, particularly, forging new friendships and having fun together.

Many of the 6.1s have left home for the first time, and we are sure that they are missing their families and countries. However, they have been so involved during the orientation, and have shown so much enthusiasm throughout the orientation week!

The activity that I loved the most was the high-ropes specially organised for the 6.1s, with the company of some 6.2s. Many of us formed teams and, slowly but steadily, made our way up to the top of each element! It was amazing to watch many people conquer their fear of heights, and fellow friends encouraging one another.

The orientation ended with a splash with a massive water balloon fight amongst 4 teams (Blue, Green, Red and Pink) with the Blue team capturing almost all of the flags. Many of us were soaked wet and splotched in screaming colour at the end of the exciting game.

To all the new 6.1s, welcome to Concord and we hope that all of you will create amazing, cherished memories whilst you are here. As for the 6.2s, all the best for UCAS and A levels!

The first week back at Concord College

Fortuitous with beautiful weather, the first week at Concord College was full of excitement and unforgettable experiences.

First of all, the induction games helped all of us to get to know each other. From the very beginning some students felt a bit shy and intimidated to come up and introduce themselves to the others. Nevertheless, even though none of us knew each other before, by the end of the day we could all give detailed descriptions of all of our body group members.

Even though most of the games were aimed at welcoming the new students, as a returner I ought to mention that I wouldn’t have missed those games for the world. Hence, I bet all the new pupils felt like they were a part of Concord community by the time they were soaked in the middle of the night, playing the water war, which was great fun.

Afterwards, two days of various house activities helped everyone to experience true Concordians’ loyalty and support. Particularly on the high ropes course, as on that field, the main rule is to trust each other. Soon enough it became crystal clear that if you cannot rely on your partner, you would most likely end up on the ground, which thankfully did not happen. On the contrary, with the support of other team members, nearly all of us were delighted to make it to the top.

In addition, I am sure that everyone had our ups and downs throughout this week. Some felt homesick and some were scared that they might struggle to fit in. Yet I believe that by now each of us got a friend and no one feels like they’re out of their element. 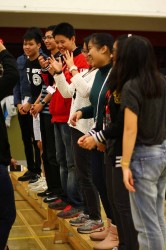 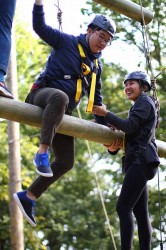