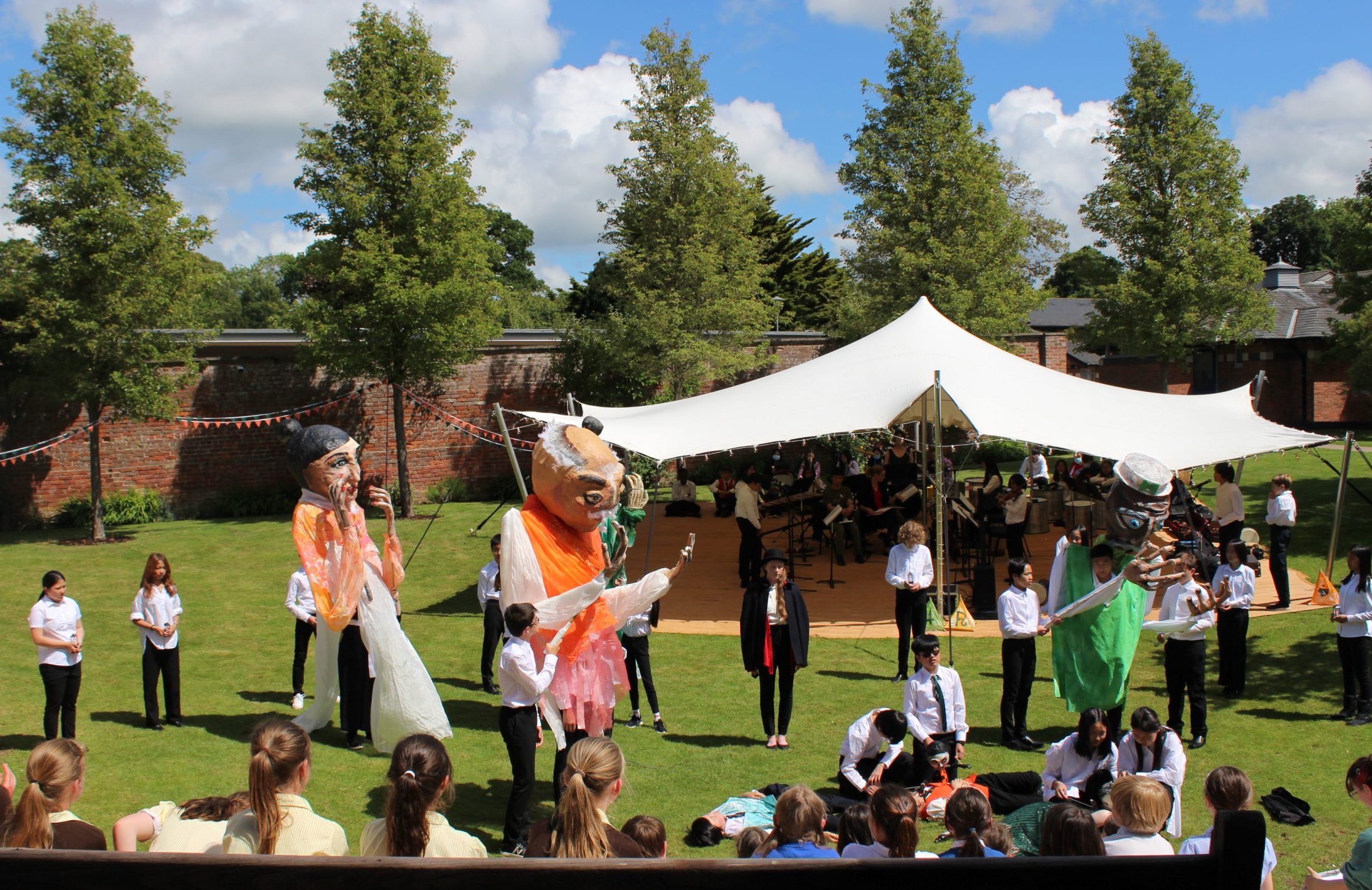 Concord’s Form 3 were all on stage in June to perform Shakespeare’s Romeo and Juliet this term in a production that included 53 students – the entire year group - and was the culmination of weeks of cross-curricular collaboration in their Art, Music, Drama and English lessons. The project began with a day of workshops at the end of the Spring Term, introducing the students to aspects of the production that they would be creating. There was a workshop delving into the meaning and emphasis in Shakespearean speeches. Another workshop, delivered by Squire Stage Combat saw the students learning aspects of realistic stage combat to allow them to explore the fight scenes. The students were also introduced to puppet-making by Headstrung, a puppet company based in Liverpool, ready for them to create their own giant puppets that would represent the parent figures in the production. Back in their own classrooms, Music lessons were dedicated to practicing and refining the accompaniment to the drama; in Art they created the wicker-framed puppets; and in Drama they learned their lines and staging for the production. On the day of the performances – a matinee for local primary school children and an evening performance to fellow students, staff and parents, the group spent the morning helping to set up their outdoor stage and enjoying final rehearsals, before performing in front of their audiences at Concord’s outdoor amphitheatre. Concord also invited back Squire Stage Combat for some last-minute coaching and to provide a hands-on workshop for the visiting local primary school children. The children were able to try out stage combat and also samba drumming for themselves before watching the F3 production. Every F3 student not only acted in part of the production but, as roles were shared between scenes, also took a hand in the music and the puppetry to develop their skills across the creative disciplines. Miss Orlagh Russell, Concord’s Head of Drama and the Director of the play said: “Students have worked tirelessly to explore and create the world of Romeo and Juliet. Many of the performance ideas are the result of the students’ creative input and self-direction.” “The workshops, the rehearsals and creations have demanded resilience and perseverance – and they should all be commended for their wonderful efforts.” Principal, Dr Michael Truss, who was pleased to watch both performances on the day, commented: “Shakespeare is always an enjoyable challenge, but in true Concord style, our students not only embraced the complexity of performing Romeo and Juliet outdoors, but they also delivered a subtle and beautiful rendition which included live music – performed by themselves – puppetry – made and performed by themselves – as well as some truly dramatic fight scenes befitting of this famous tragedy. “The scale of their ambition as well as the skill and courage of their teachers to allow them to run with something so intricate was absolutely wonderful to see.”