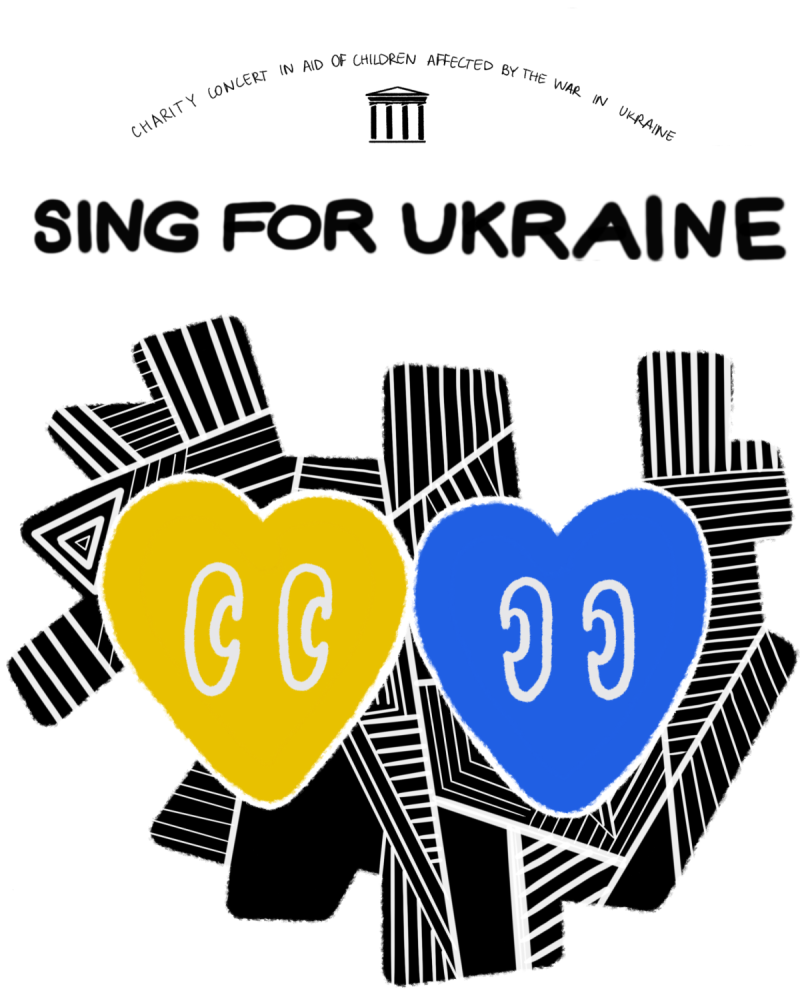 A group of talented Concord students came together recently to create a magical and exceptionally meaningful musical evening and to raise money to support children affected by the war in Ukraine. The 'Sing for Ukraine' concert showcased songs written by the students themselves as part of Concord’s annual songwriters production in which students from across the school are coached and supported by a team of professional musicians. Concord’s Head of Music, Mr Stavros Kokkinos explained: “Planning, writing and rehearsing of the songs started before the war in Ukraine broke out, but as soon as the sad news reached us all, we all felt that we needed to do something to support the humanitarian relief efforts. This gave rise to the idea of a live charity concert.” The concert was held in the Morris Building theatre and was also live-streamed on YouTube. The wonderful team comprising a professional music producer, session musicians and a Grammy-nominated singer songwriter who had supported the students in the songwriters production, joined them live on stage for the concert. Mr Kokkinos said: “It was wonderful to have all the musicians who worked with the students during the pre-production phase, performing on stage alongside our young songwriters and helping them realise their songs in their live version.” The songs, from seven young songwriters, explored a range of enduring themes such as love, friendship and identity and were in a variety of styles. Mr Kokkinos was very proud of the students: “The young songwriters who took to the stage demonstrated humanity at is best, by showing compassion and empathy, and by creating something beautiful from nothing, they reminded us all that we must never lose hope.” The concert formed part of a fundraising initiative in aid of Voices of Children, a Ukrainian charity providing emotional and mental health support to children who have been traumatised by war. Fundraising efforts were led by 6.1 student Dasha, who not only wrote for and performed in the concert but designed elements of the programme and worked with Concord’s  student Outreach team to sell refreshments and run a raffle for a Sonos speaker, kindly donated by Concord’s Head of IT, Mr Ian Stockbridge. In-college activities have so far raised in excess of £450 for Voices of Children. Further funds are being raised by online fundraising and donated to the Disasters Emergency Committee (DEC). The whole of the live concert can be viewed on the Concord Music Department YouTube channel: The songwriters hope to raise additional funds by making the professionally recorded versions of the songs available to purchase online through the Music Department’s Band Camp page. Further details about this will be available soon. Concord’s songwriters were: Dasha, Lara and Julia who are in 6.1, Ping, Eunsoo and Ruby from Form 5 and Macy in Form 3. They were joined by professional session musicians: Rueben Aldridge – trombone, Becky Biggins – lead vocals & backing vocals, Claire Fitton – saxophone, Andrew Jones – guitars, Stavros Kokkinos – violin, Clive Rainbow – bass, Antony Stevens – drums, Chris Stevens – trumpet and Jonathan Wysome – keys.