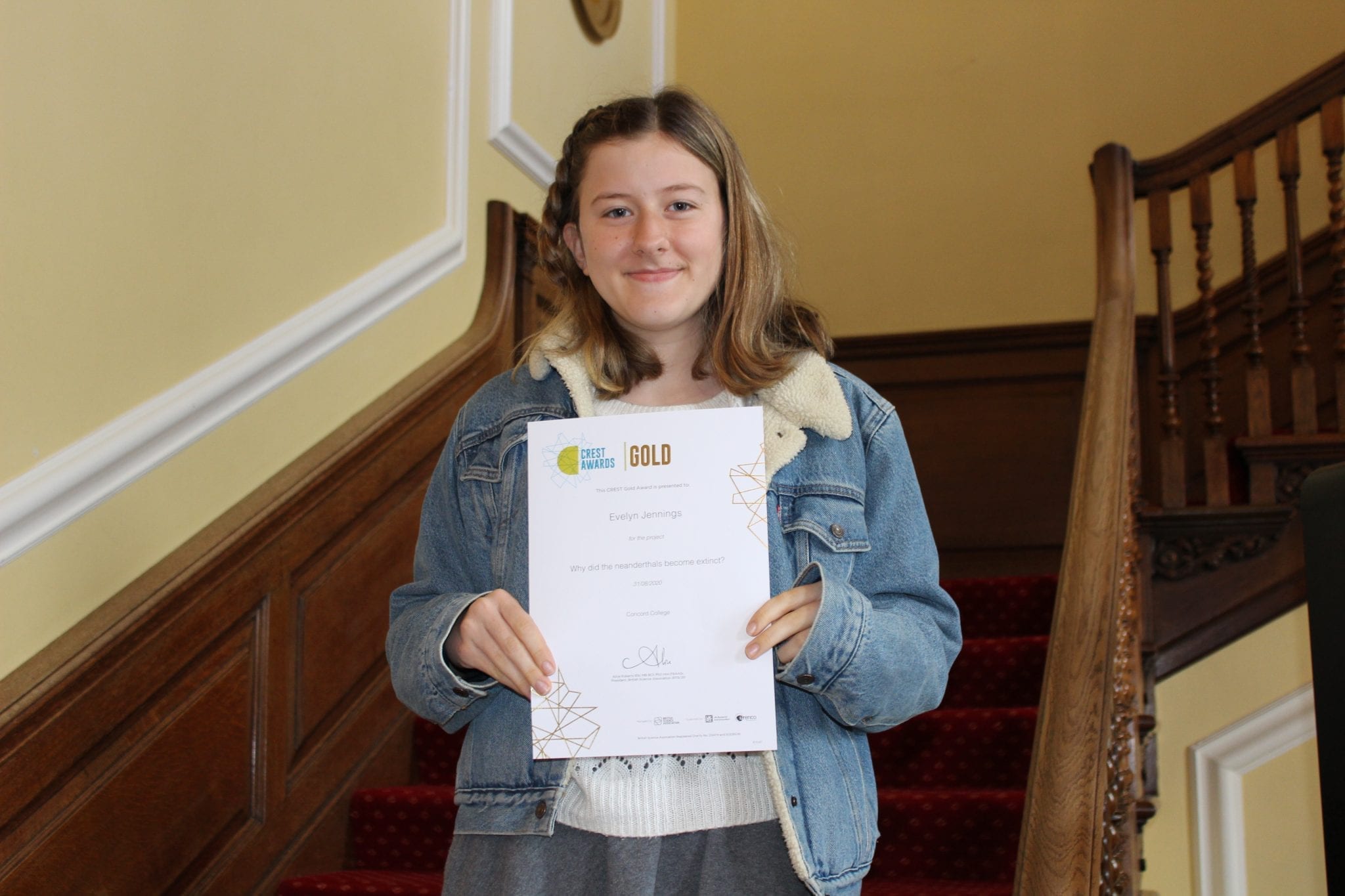 6.1 student, Evie has been awarded a prestigious Gold CREST Award, for an insightful STEM project she worked on during her time in Concord’s Lower School. CREST is a national-recognised scheme that allows students to carry out a Bronze, Silver or Gold project in Science, Technology, Engineering, or Mathematics (STEM) – or a combination of disciplines. Launched in 1986, it inspires young people between the ages of 5 and 19 to ‘think and behave like scientists and engineers’ through research and student-led investigations or projects. Silver and Gold Awards are longer-term, in-depth projects run by the students themselves, similar to an EPQ project, and Evie opted for a Gold Award despite only being 14-15, when Gold is actually aimed at students aged 16 or older. Evie’s project was titled ‘Why did the Neanderthals go extinct?’ – and was chosen based on her former passion for biology during her Lower School experience. She said: “As a research project, I was able to choose any theme of my choice, and I did so based on my passion for biology. I was also considering submitting working towards the Silver Award, but in the end opted for Gold instead. “The project took over 70 hours to complete – which was mainly conducting and formulating research, with an in-depth write-up at the end to conclude my findings.” Evie’s mentor for the project, Biology teacher, Mrs Rosina Hudson said: “Like EPQs, the award is very independent – whilst I provided some support and feedback to meet the Gold standard, Evie was in charge of her content, setting herself deadlines and goals, and completing the project. “It’s a lot of hard work that requires a lot of self-motivation. “It’s commendable, as normally Gold projects are carried out by A level students!” The feedback from the assessor was: “It is clear that a lot of hard work has gone into this final project write-up which was a very interesting read. “Creative thinking, and the ability to source appropriate evidence are key skills of a good scientist; you have demonstrated both very well. Keep up the good work.” CREST Awards are highly sought after, so Evie will benefit from including this prestigious award on her UCAS personal statement and CV – Moreover, Evie wishes to pursue an EPQ project in the Sixth Form too, as another desirable project recognised by many top universities. Evie, who has chosen to study Economics, History, Mathematics and Further Mathematics for her A levels, added: “Whilst I still enjoy biology, the main ‘take’ from this is the useful skills which I can develop and take with me into Sixth Form and university.”