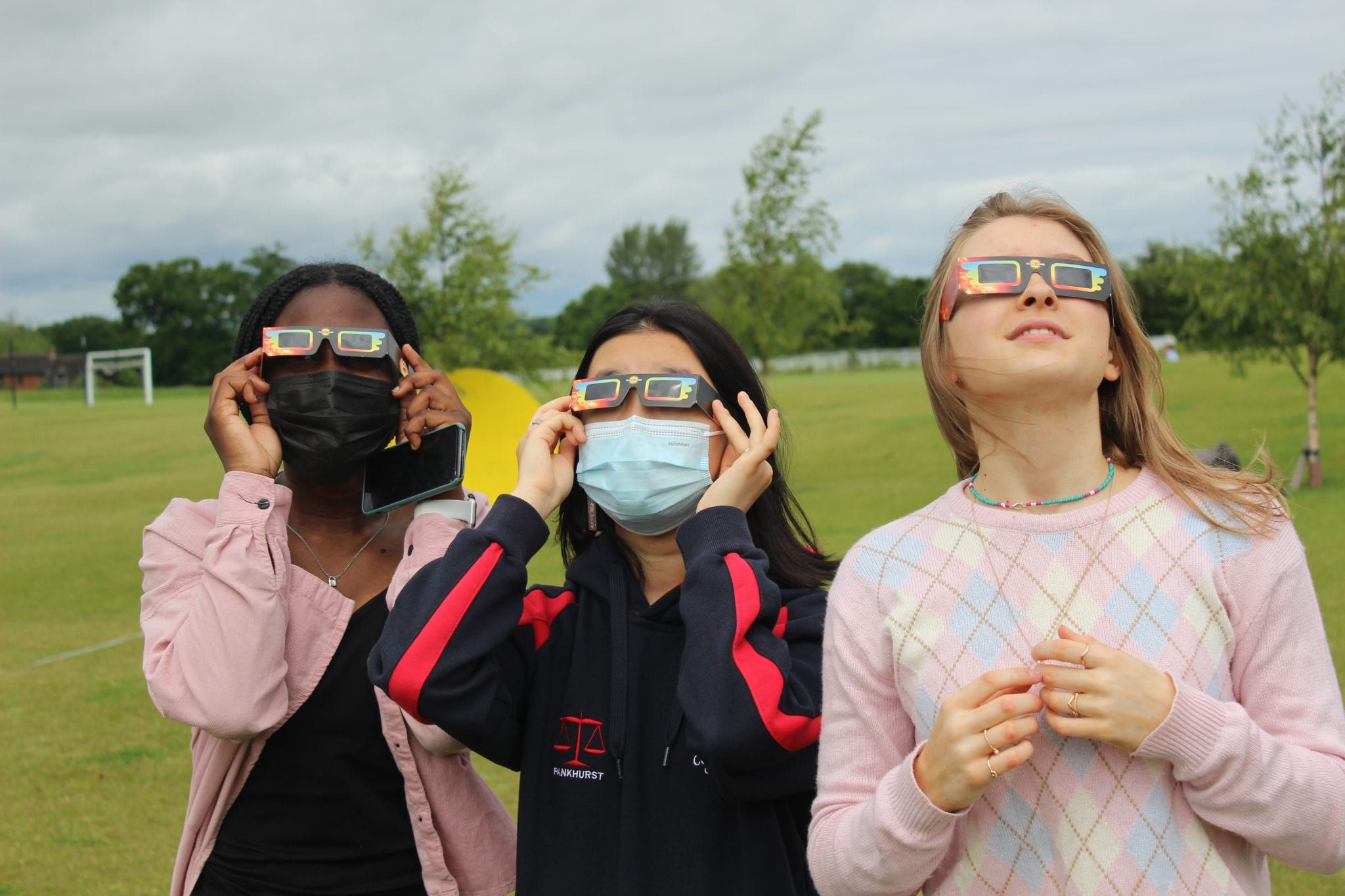 Last Thursday marked an exciting astronomical event – a partial social eclipse, visible from the UK for up to 2 hours. Eclipses happen because the moon passes between the Earth and the Sun completely blocking out the light. By luck, the Sun is 400x larger diameter than the Moon but also 400x further away. Information was shared by Concord Physics teacher, Mr Mark Weston and Chemistry teacher, Mr Roger McBain, and groups of students and staff between 10am and 12pm gathered on Hall Meadow, besides the Science Block, to witness the partial eclipse. With hundreds of pairs of eclipse glasses to use and a couple of specially modified telescopes, tens of students were able to witness the spectacle – and when the clouds dispersed, “students could see the moon blocking the sun by as much as 30%”, according to Mr Weston. He said: “It was great that lots of groups – not just Science students – were able to get over, including teachers, to view the eclipse. “It definitely brightened up through the day, with the clouds parting beautifully close to 11:10am when the eclipse was at its maximum for this location (around 30% covered). “Whilst such events are quite common on astronomical timescales, they are incredibly rare during a human’s lifetime.” As well as a visual spectacle, it was an opportunity for students and staff to increase their knowledge. Concord’s Science students were able to recreate their own eclipse using the to-scale 1.5m Sun at 160 metres away with a tiny 4mm moon at 40cm away. Mr Weston added: “They were also surprised by the true scale distance between the Earth and Moon – around 10x Earth circumferences. As part of Concord’s ongoing commitment to Science Outreach, the Science Department also sent local primary schools information and resource packs including sets of 5 eclipse glasses. Speaking of the inclusion of local primary schools being able to witness the event, Mr Weston said: “We have missed welcoming the fantastic pupils of local primary schools to Concord during this challenging year, so we thought we’d update them on this exciting astronomical event. “The Science Department hopes this was a worthwhile opportunity to engage small groups of students in scientific discussion. “While it was nowhere near as impressive as a total eclipse, it’s always interesting to see a ‘little bite’ taken out of the Sun and this can be used to stimulate engagement in science in a more practical way – something which has been limited for many due to Covid-19.”. Mr Paul Williams of St Lawrence Primary School (Church Stretton) said: “Thank you to Concord for the idea and resources. “Despite the cloud cover, lots of our older children saw the eclipse – So, on Friday, we had an interesting follow-up discussion in my class about the causes of the eclipse using some of the resource packs.” Click here to view the photo gallery from the event at Concord.