in residence’ catches the imaginations of Concord students 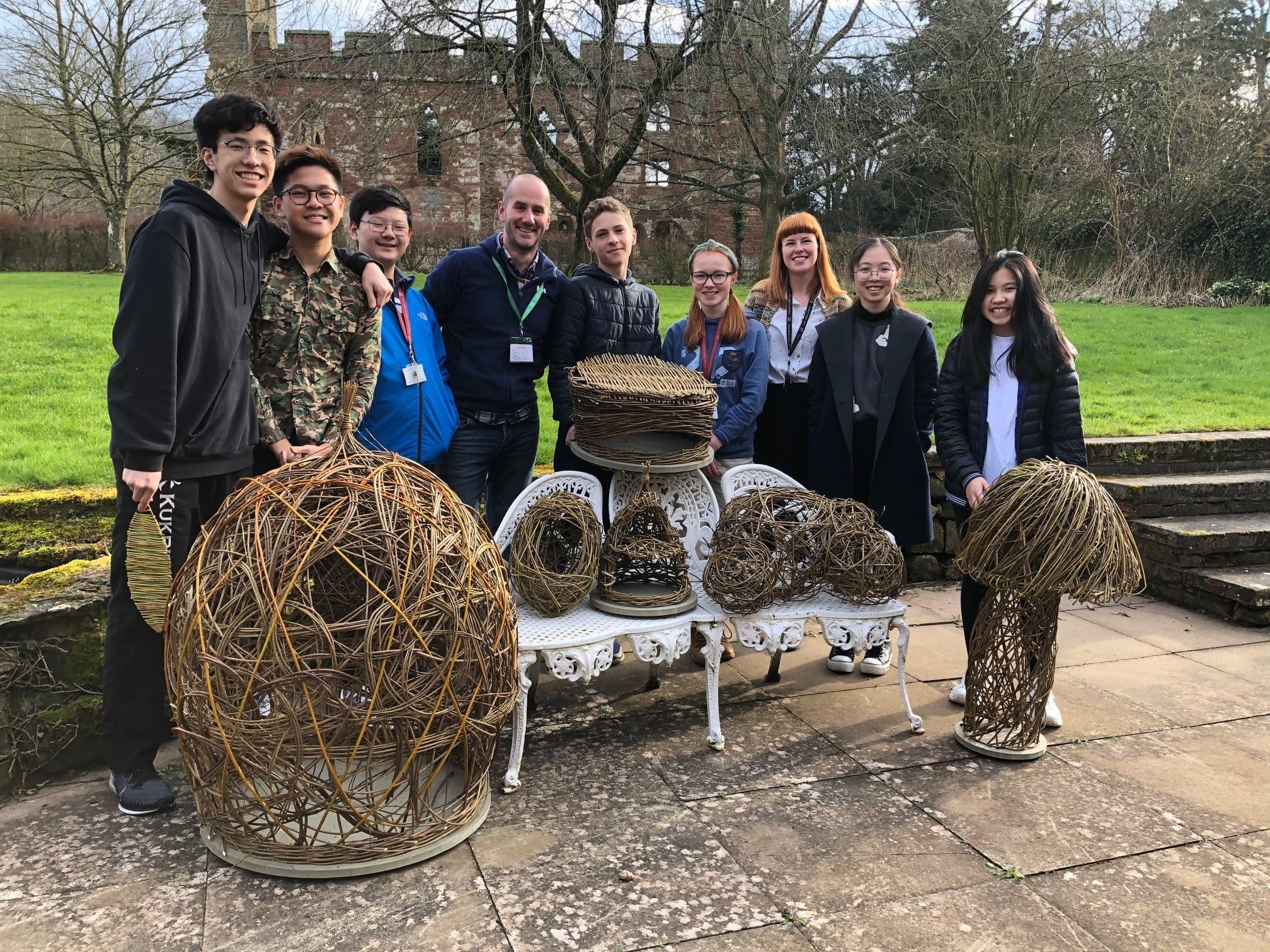 Some of the most inspiring work that he has experienced… That was the summing up of professional willow artist Ben Mayho who, for two weeks, was ‘artist in residence’ at Concord. He found the experience of his first visit to Concord to give willow making workshops ‘very stimulating’ and the response of both students and staff to be ‘hugely positive.’ Ben has developed his skills over the last dozen or so years and has been in business commercially for the last four years. He came to the notice of Concord through his creations for the National Trust at Attingham Park where he has also been recently moved his13ft sculpture representing ‘Mother Nature’ from the main courtyard into its new home in the walled garden. “The college had seen examples of the work I have done locally and wanted students to have the opportunity of working with a different medium as well as hearing from someone different as well,” said Ben. So his willow-making workshops were for Forms 3 and 4, teaching alongside art department staff, whom he described as ‘absolutely brilliant.’ He said the Form 4 group had formulated their own plans for what they wanted to create, with somebody else’s input - which happened to be his. “As a result of their approach, I felt all the students gained a lot from the workshops. They were thinking about the work in a new way and having to adapt to using what for them was something completely different – adapting most remarkably. “None of them had worked with willow before, but they quickly learned how to adapt when confronting a problem and demonstrated an ability to think creatively. I was particularly impressed with the way the art department gave the students the space to think creatively and supported them in doing it. “The students had a first-class attitude and the staff were not only most encouraging, but fully behind the work, with designs ranging from a three foot high pineapple to the creation of a toadstool – both in dried and wet willow. “One of the female students took sticks to create a tree, twisting and weaving them around the front, which was a great idea and she did very well. “Form 3 worked on sculptured lighting pods which I understand will be used for drama performances in the future. From my perspective it was full credit to the staff for giving the students a free rein on the sculptures.” Ben explained that the dried willow gave the framework solidity and reach, whilst the wet willow was more pliable. He grows a small amount of willow himself for colours and certain properties, whilst the average standard comes from commercial farms in Somerset. Mr Anthony Hudson, Concord’s Head of Art, confirmed that the pods, which were part of a total of 70 sculptural forms, would be used for outdoor drama performances next term. “The students produced some ambitious designs for their sculptural pieces and it has been amazing to see the structures evolving. The students were very responsive, showing patience, craft and creativity. “Ben introduced the students to a broad range of possibilities, learning how to work with different types of willow, dry and wet, as well as colours, and experiencing problem solving techniques. “There was collaboration, creativity and lots of enjoyment. Students were encouraged to develop their own ideas, either working in groups or on their own. “We are keen to have students working with artists of different talents and plan to build upon this initiative in the future.” Students have been expressing their pleasure at taking part in the willow making workshops. Said Bulut: “I’m proud of my sculpture. I created the whole thing from start to finish with Ben’s guidance. “He helped me to create something unique, better than visualised in my head.” Said Si: “I really liked making the mushroom structure with Ben and I’m really happy with the results. “In particular, I enjoyed experimenting and having fun making the artwork.” Said Virginia:“I really liked my sculpture. I enjoyed learning new techniques and our idea was very unique, so I enjoyed making something I had designed.” Click here to see more images of the willow workshops.