It has been an unprecedented start to the new term for all Concordians. To welcome the new students and help them adapt to Concord’s environment, Lower School Monitors worked hard together and planned a variety of online activities for three days of induction sessions. Now, let’s see what the students thought about the ‘induction games’!

I am a returning student in F4 and recently took part in the games for a few days. I am a day student and haven’t seen any boarders for a long time – this is why it was really nice seeing them again through a video call and chat to them. In the call, we played many games such as Pictionary and Use Your Words! (online, of course). It was very fun seeing and speaking with other people and some of the games were very funny and got both day students and boarders to interact more. I especially liked the Use Your Words game as it was humour-based and the whole group laughed lots.

The Monitors also went through the events which were on offer and explained how a basic day in Concord operated. They answered our questions about how lunch would work or when we were supposed to register, and really helped (especially the boarders) understand how life at Concord College works. We were introduced to the Heads of Houses and got to know the Monitors and their names – so if we had any questions in future we could contact them.

Overall, it was a really fun evening where we got to know some people in our ‘bubble’ and other years and we got to chat with other students about school life and the year ahead. All our questions were answered positively and effectively which helped us understand what would happen in the first week in particular, so we could be more prepared and excited for the term ahead.

The introductions… we had Penelope, Ten and Eve all from Pankhurst and they were extremely friendly helpful. We then moved onto the first game which was ‘name the location’ based on pictures, which I ‘absolutely smashed’ as Penelope said. Then we played a ‘Where’s Wally’ type game; we had to spot Mrs Coward, Eve and Ten, which was very imaginative. Afterwards, a Chinese Whispers based-game followed, and this was very fun. Lastly, we moved onto the emoji guessing game which everyone enjoyed.

From my experience, I think all the new Form 3 students got comfortable meeting the crazy Pankhurst House, and it was really chilled and enjoyable. Overall, an amazing night.

We had our Gandhi Induction Meeting online because of the pandemic. In the beginning, we introduced ourselves one by one. There are people from all around the world at Concord. Then, we played a few games to know more about each other. The most memorable one was the game Use Your Words. Trying to be as humorous as possible, we also enjoyed others’ interesting captions, subtitles, headlines, etc. The meeting only lasted for less than 1 hour but was worthwhile. I am looking forward to participating in the upcoming House events, and meeting more new buddies in Gandhi.

On the 3rd September at 19:30, me and other new students who were joining Concord College got a chance to chat with our Monitors (David and Virginia) on Teams. During our session, I had lots of fun as I got to meet new friendly people and because we played games which helped us to get to know each other better and generally have fun. These games included: ‘two truths, one lie’, and Werewolf online. These sessions went on for about three days in small segments; each session I found out something new about people from my group and the amazing Monitors also helped by answering our questions, which made me relaxed and even more happy to start school.

Overall, these meeting were very enjoyable and helped me gain a better understanding of the school as well as providing enough information for me to be comfortable to go to school with confidence.

Concord has always started the year with fun icebreakers to allow students to get to know one another. Usually they would take place in the Sports Halls, however this year, due to Covid-19, we fulfilled this task online. Although this situation made inductions tricky in parts, the Lower School Monitors from all over the world got together online to plan ahead, to make new students feel welcomed.

The Form 5 Monitors split off into groups to prepare the games and resources needed for the inductions. Monitors were then paired up to lead a meeting with new and returning students. Personally, I understand that with meetings, online students would feel shy and keep their cameras and microphones off. That is why my partner and I chose to encourage them by choosing games that require them to turn on their cameras. For instance, we played a game called Charades. To make them feel more comfortable we started first, turning on the camera and acting out an animal without making any noises. We had different rounds of charades and every round it increased in difficulty.

Another game we played was called the ‘Hat Game’ where students had to go around their room finding an object that fits the leader’s request (a red item) and placing it on their head. By now, the students were starting to feel less shy and were willing participants in the game. I was glad that we were able to meet new people and leave them with a good experience despite it being online.

House Dinner was a very sociable event. It was a fun way to get closer to friends and new people. The food was really good, and the dessert was amazing. There were lots of activities that were held, such as the perfect game, where you had to match a prefect to an interesting fact about them. It was nice because of the welcoming environment that the dinner had. It was an occasion full of laughter. The musical talent showcased during the dinner was splendid too. It amazingly accompanied the dinner, complimenting the cool atmosphere that was created. I really enjoyed it!

Gandhi House is an amazing place for me so far, as I am in my first year at Concord College. The House Dinner allowed me to meet new friends and meet our House Captain. I had a wonderful night. In the dinner event, we had a delicious meal and fantastic music. Peers from Gandhi with special talents gave us ‘bravos’ performances. I enjoyed the music very much. I also participated in the quiz. From joining the quiz, I knew more about the people in our ‘house’ and it was fun and memorable. Everyone was happy and chatting, so time flew by… Dinner ended around 9:30 and we had to go back to the boarding house. This was a fantastic experience for me, and I hope everyone will enjoy it and looking forward to the next House Dinner. Last but not least, thank you very much for everyone who participated in the event and contributed to it.

The Mandela House Dinner this year was an absolute blast. It was not only a time for all “Mandalians” to gather together after the long summer break, but also a time to welcome the new Mandalians to our huge family. As green is the colour that represents Mandela, the entire Dining Hall was decorated with green accessories, including green napkins and lime juice. The dinner started smoothly with a piece of wonderful music and a speech made by our HHHhhead of House – Mr Rawlinson. He mentioned that we are lots of tiny green droplets that form a gigantic green ocean we unite.

The food was good but what I enjoyed the most was meeting new people and perhaps even making new friends. We were talking about lessons we’ve so far had and our interests in life. Time passed by quickly as we were enjoying our conversations so much. Mr Rawlinson made another speech and the House Dinner came to an end.

I enjoyed this year’s House Dinner slightly more compared to last year as I was familiar with the event and not as nervous anymore. I had a fun – an unforgettable night. I can’t wait for the House Dinner next year!

The first few weeks of school have flown, and we have already fulfilled our days with exciting and adventurous events, but the event I would like to talk about is the Pankhurst Dinner…

This event was not only for us to eat the incredibly delicious food that was cooked by our amazing catering team, but for us to connect, raise our team spirit and get to know each other as a team!

Pankhurst House Dinner did not start out in the Dining Hall, but rather in the Morris building, where we listened to a presentation from Mrs Canney, our Head of House, who lifted our team spirit before dinner. Then followed a presentation from the prefects, where they introduced themselves to Pankhurst with a twist, by recording a mannequin challenge, which made our evening even brighter than it already was. After a good laugh, we had a talented Pankhurst band play an amazing song for us, that featured a piano, guitars, beats and even violins. After the delightful presentation about Pankhurst, we headed to dinner, where the tables were beautifully set, and our starters were already waiting for us. When we sat down, prefects played a game of two truths and one lie with us; the rules were simple – prefects said three facts about themselves and two of them were true and one was a lie. The whole Pankhurst team then got to guess which one the lie was, which was a brilliant idea to get to know the prefects better. After our great starters, we had a great choice of main courses and desserts. But the most enjoyable part was that everybody got to know each other, and I’ve met some great people, which everybody did!

In conclusion, I was very honoured to be in the Pankhurst dinner of 2019!

The time of year when all members of Teresa can sit down and bond with each other… The Teresa House Dinner is a fantastic chance for Lower School members of Teresa to get to know Upper School members of the ‘house’. During House Dinner, there was a game played that involved matching the photos of prefects, house captains and monitors (when they were toddlers) to their names. This game united members sitting on the same table, it was funny and it was exhilarating to communicate with people that you weren’t familiar with.

Also, during dinner, there was wonderfully talented musicians of Teresa playing instruments or singing which created a convivial atmosphere. When everyone had nearly finished, there were also games such as the “siblings’ game” where members of the house who had brothers or sisters guessed what each other were thinking – which hugely entertained us.

The last and most important part of the Teresa House Dinner was when Mr Arthur and all the prefects taught us the chant for Teresa house. T! E! R! E! S! A! Teresa! This not only symbolised support and reinforcement for all members of the house, but also transmitted the key ideas of Teresa: friendship, affection and giving the helping hand. At that specific moment in time, we were not individuals. Everyone was a member of Teresa House, of a huge family. We were one. 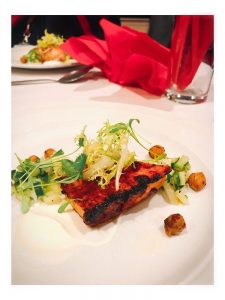