On the sunny afternoon of 4th May lots of students came over to our great swimming pool for the yearly inter house competition. The hype was building up every second, who will win? Who will lose? Well, it was time to find out. Some were nervous about the upcoming races, but the amount of people who came over to support was more than enough to cheer them up. Each house had a full team since there were so many keen to show off their swimming skills.

Everyone was so loud trying to encourage their team that they did not even hear when the actual event started! It began with freestyle and we got some promising results straightaway. Everyone seemed to be trying their best and very determined to win, so sometimes we even got unexpected outcomes. It went on with all the different strokes and the thrill kept growing. The relays were the most exciting part of all. Everyone exerted themselves to swim as fast as they can so much that they couldn’t even come out of the water afterwards – They were that exhausted.

One of the greatest moments were when the races were about to start. Silence came on, the amount of adrenaline was building up, whistle and off they go! Mandela! Pankhurst! Gandhi! Teresa! The atmosphere was splendid and extremely stimulating.

Meanwhile, there were Barbecue stands outside with an amazing smell and definitely delightful tastes. Of course, quite a long queue formed straight away waiting to get their hands on those delicious looking burgers. Soon, it was time to give out the awards to those who deserved them. The happiness in their eyes and the pleasure in their smiles, all indicating that they went through hard work to achieve the prizes.

Overall, the Swimming Gala was an impressive event. At the end, it was another event won by Gandhi house, and surely everyone thought that they were well deserved. At that moment, who won and who lost didn’t even matter as everyone had a good time. I have personally swam and found it extremely inspiring with all the support we were all receiving. We are all definitely going to look forward to the next year’s event! 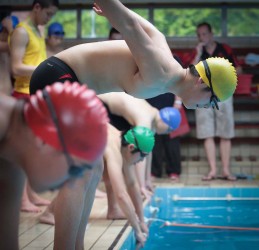