On a surprisingly warm Wednesday 29th of April Concord held its annual Sports Day. It was a day full of running, jumping and throwing, all of which were exceptional for spectators or competitors.

It felt as if almost all of the Upper and Lower School took part in one or several events, be it relays or individual events. And those who weren’t participating were enthusiastically cheering the competitors on from the side-lines. All of the houses conducted themselves with great team spirit and passion; as part of the Sports Day there was some new events this year. The high jump took place on Monday 27th, prior to Sports Day!

The great events were followed by a fantastic array of barbeque food which we have the kitchen staff to thank for. The overall winner of house athletics this year was Mandela, however all of the houses had a great turnout, and many will agree that the competition wasn’t won easily with all the houses standing firmly for the pole position.

I think, that although there were winners, everyone ought to be proud of their own achievements that day because everyone, even those who didn’t win, contributed to their house gaining points. And also a massive thank you to all the organisers, without them, the day wouldn’t have happened.

A massive well done to all who took part, cheered and organised. Last but not least, thank you to the Heads of Houses for spurring the houses on and for encouraging people to have a go. Overall the day was an amazing event in which all the students were able to show their true sporting colours. Congratulations to all.

It was that time of year again – the Lower School Sports Day. House captains got nervous as they looked for athletes to participate. Being asked if you could run, just for the sake of your house points, even if you didn’t win. Now that’s the spirit! The sporty excitement arose as the day came closer, and soon the day had come. Thankfully, the weather was kind to the innocent little Lower School kids. After the several nights of training after second prep, the day had come. It was time to put your best into it, no matter what.

On Wednesday, 30th April, at about 2pm, the athletic events commenced. Starting with the Form 3 100m race for boys and girls, then Form 4s and so on. The atmosphere was full of cheerful, supportive house members that were always ready to encourage their athletes. Some upper school students also came to spectate, adding to the number of supporters. The day was one to remember with many records broken some of which include Damilola Olusanya’s Form 4 100m record, the Mandela girls’ 4x100m team record (by the human bullets – Nengi, Janice, Stephenie and Shuxuan), among others.

The 6x100m relay was a new event, introduced this year. The relay team had a mixture of both genders; 3 boys and 3 girls. After careful planning and selection of team members, the athletes were ready. The teamwork involved in the race between the girls and boys was incredible. In the end, the Teresa relay team won, closely followed by Mandela’s team.

Finally, the tug of war was spectacular. The expressions on people’s faces were truly memorable. The determination that travelled from one team member to another along the rope was simply extraordinary. The teams worked hard and worked together, although some teams worked a little harder than the others (of course).

By the end of the event, prizes were given out and the overall winner was… Gandhi. They all got up and started cheering endlessly as soon as it was announced.It was definitely a close match between all the houses, and it was the adrenaline and motivation that kept us all going. Overall it was a wonderful experience and a truly unforgettable day. 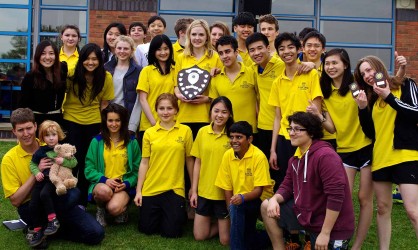