For weeks and weeks, all everyone had been talking about was the Mayor’s concert. And after all the hard work and time everyone put in, the concert took place in Theatre Severn on the 15th of March. This year, we had a huge variety of performances separated into two parts — the musical acts and the society acts. This performance was even broadcasted via live stream, and families all around the world even stayed up until 3 or 4 in the morning to watch!

We first had a beautiful and strong start with Mr Kokkinos, the organiser of the whole event, and Ms Perrins performing a Greek song, accompanied by the chamber choir and a wide range of instruments. It was followed with other musical acts, such as band coaching, choir, and wind ensemble. There were many highlights of the first act, but my favourite was definitely the samba band. Not only was it loud and exhilarating, but it gave me a new experience of playing these types of drums.

Then came the 30 minute interval, where everyone performing in the first half of the concert could catch their breath and rush to get changed into their society costumes. We had many society performances to offer, not to mention we even had two new societies; the Greek and Latin American, which both performed very well. Many of the societies, such as Thai, Eastern European, Vietnam, Indian and China performed traditional pieces whilst wearing enchanting costumes, whereas some societies, such as Singaporean, Malaysian, Indonesian and Hong Kong put a modern twist on them.

I was involved in the Hong Kong society performance and honestly, I wasn’t too fond of doing it at first as I didn’t know how to dance whatsoever (and I still don’t). But as I went to more and more practices and rehearsals, I realised that it’s more about the enjoyment and fun of being involved in a society, rather than being the best at everything. I loved the thought of having so many societies perform, as it not only shows that Concord has a wide range of traditions and cultures, but it also helps many of us cope with homesick as it brings us together with familiar faces and languages. The thing that surprised me the most was the amount of Form 3s involved.

As a Form 3 myself, I didn’t feel as if I would have enough confidence to step up and perform in front of the whole school due to the fact that we were all new and weren’t very sociable with everyone. I thought that I wouldn’t have any fun due to the amount of effort and time I would waste. But, as I joined more acts, like the samba band, choir and Hong Kong society, it started becoming more fun as firstly, we could meet new people, and secondly, we could take a break from the school work and have leisure and relaxation. I then ended up not regretting it. The Mayor’s concert was a night that would never be forgotten and I hope to participate and do more next year.

A brilliant, amazing performance by the students of Concord. It is uncommon to hear of students performing in an official concert in front of hundreds of people. The sheer confidence we displayed was just exceptional. The concert was, for the first time, live streamed across the world as parents watched their children perform sensationally. There were parents who stayed up until three o’clock in the morning just to watch the Mayor’s Concert! From a strong start by the Strings Group to the powerful end by the British Society, these students has achieved what countries have never been able to achieved, the cultural diversity of different countries all packed into two hours! As we come from different cultures and countries and we have set our differences aside and produce a concert filled with a huge variety of acts showcasing all the different cultures around the world.

The Mayor of Shrewsbury himself was extremely pleased with our performance as acts from all over the world, from Britain, China, Taiwan, Hong Kong, Thailand, and many more countries displayed their cultures and diversity with so much passion creating a joyful atmosphere during the Mayor’s concert. With the Korean Society performing with Samul nori percussion instruments, a vibrant Bhangra dance by the Malaysian Society, a Scottish ceilidh performed by the British Society, a Chinese opera by the Chinese Society, and so many more. There were not just cultural performances but also musical numbers done by Choir and Chamber Choir, String Group and Wind Ensemble. In my opinion, it was a night never to forget, although I could not watch it live, just listening to all the performances on my computer was something I will cherish for the rest of my life.

Also, if you would like to take a look at the concert itself, DVDs are being sold for six pounds containing all the performances from the Mayor’s Concert. 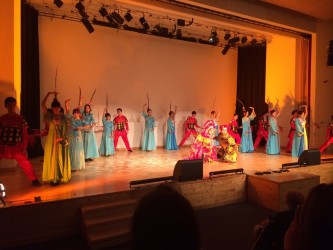 Everywhere you go around the college people are talking about the Mayor’s concert – which is growing closer. Everybody is getting ready to perform in various acts on Friday night and then again on Sunday night. The Mayor’s concert is an annual even that gives a chance for students from all around the world to join or make societies and then put together a dance, song or both from their country or culture. As well as all the societies, the first half of the concert is dedicated to musicians. In this half, students get to show off their musical talents by performing great pieces in groups, bands or even as soloists. The concert is great and everybody always has fun, whether they are performers or just people in the audience. Personally, I find it particularly interesting watching the societies as it shows me all the different cultures and environments that people in Concord come from.

This year, we have a huge selection and variation of acts. Some of the musical acts include Choir and Chamber Choir, String Group and Wind Ensemble. The societies that are performing consist of:  Eastern European, British, Taiwanese, Chinese, Malaysian, African, Hong Kong, Singaporean, Indonesian, Korean, Thai and Vietnamese.

I think it is great how so many people got involved with this concert and I can’t wait to see all of the acts. I myself am in wind ensemble and I know that everyone is starting to feel the pressure of the oncoming performance. Rehearsals are starting to get more frequent and the pressure is mounting, but more importantly – everyone is still having a great time. On Sundays, you could see everyone in their costumes and working hard trying to perfect their dance or songs. Although I haven’t seen everyone perform, I have caught glimpses of some acts and they already look great!

Taking a sneaky peek had just increased my enthusiasm for the concert. Moreover, I walked into West End recently and saw African society rehearsing and I couldn’t help but think about how great it is that everyone from the same culture can get to together to put something together. Not only does this help people discover the beauty of other cultures, people from their own place could truly bond and gradually make new, long-lasting friends. It is truly amazing to watch. The standard at Concord is amazing and I know it will be a great concert.

To everyone performing in the concert Good Luck and to everyone watching it, Enjoy! 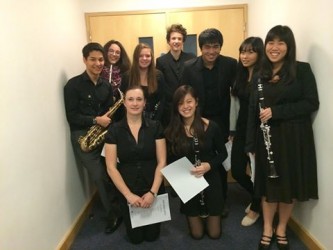