On the 21st of March 2014, Concord College held their annual Sport Relief games in Concord College’s second sports hall. The atmosphere was amazing and many of the students were enthralled by the fact that we were going to have some games and fun, but really because we got to miss first prep. There were also some charity items that you could buy which included cakes and ice cream and I’m sure the charities would’ve been overjoyed after they had seen the amount of money they got from selling them.

Each team was divided by boarding house eg Bell House, Red House and others joined together, so Broadlands and Main House joining together became the Mainlanders. To add spice to the events, some houses decided to be different and so they came to the sports hall in some of the weirdest costumes, with Bell house boys winning that event with the students coming in white shirts and the Bell House name spelt on their stomachs and the house parents Mr Bill and Dr Pugh coming there dressed in banana costumes….

The target this year was for a team to finally beat the Day Students as they’ve been winning it since it ever started and we were in for a show. It started off with the sack race, which is always a delight to watch as many people step up to the plate and show us their impressive diving techniques. We also had the leapfrog game, which ended up giving people a lot of minor injuries and some people just can’t jump. There were many other games that were played and overall proved to be an amazing time and worth everyone’s efforts. Finally, to everyone’s surprise, the Day Students failed to win for the first time ever and the trophy went to Bell House (boys & girls) and I’m sure the Day students received a lot of stick. The games were finally over but then there was a sudden change from happiness to worry as everyone had finally remembered that they had Saturday tests the next day! 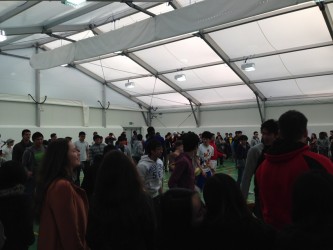 Visit the Concord website for some great images of this event: http://concordcollegeuk.com/news-and-events/sport-relief-2014-gallery/