This D of E expedition is more like a training session, and we did not have to carry all of our stuff while we were walking, which really cheered us up.

The first day was quite relaxing and enjoyable, despite the terrible weather in the morning. It was literally snowing when we got to the mountain; we had to wear hats and gloves to keep the cold away from us as best we could. It was fortunate that I had them. We did some micro-navigation throughout the day by finding little, recognisable features on the map. For example, we had to locate small caves and ponds around the hill, by “contouring” or “hand-railing”. I feel like I have developed new navigation skills during this training. I just hope that now, our group will never get lost in the actual expedition.

What surprised me was the river features beside us during the day. As we have just studied rivers in Geography, I was able to recognise a lot of them. I was so excited when I saw rapids, interlocking spurs, flood plains and meanders! It was fantastic to see how the stuff we learned at school had reflected in real life! – You get a closer view of nature through this.

For the bronze group, we cooked a two-course meal with trangias for the first time. Night had begun to fall and it had started to rain, so it was a chaotic experience fumbling with the cooking pans and re-lighting matches when the fuel can ran out. However, we eventually got the hang of it and we couldn’t have felt more accomplished when we finally got to taste our bowls of steaming hot pasta.

The second day, we navigated in pairs with minimal assistance from the accompanying teachers. Despite taking a few wrong turns at the beginning, we quickly learnt to go back and recognise the features on the map to check that we were on the right track. The most challenging part of the journey was the hike up a steep hill, as there were prickly gorse bushes on both sides of the narrow path and we had to walk slowly due to the wet, sticky mud on the ground. We tried our best to motivate one another and finished our hike right on time at the end.

All in all, we’ve learnt a lot from this practice expedition and we’re definitely more prepared for the official one in a few months. It will certainly be more physically demanding as we will have to camp outdoors as well as carry our tents and overnight equipment… but I do feel up for the challenge and I believe our group will be able to overcome any difficulties along the way, as a team.

Concord College is an amazing place full of joy and opportunities but at the same time difficult challenges. When I say difficult, I really mean it… This year, our DofE Bronze students are prepared and excited for the Silver DofE award which is totally a next level ahead. For those who may not know what DofE is, it stands for the ‘Duke of Edinburgh’s Award’ which is a voluntary, non-competitive programme of activities for anyone aged 14-24.

Participants have to push themselves out of their comfort zone to finish a 3-days & 2-nights expedition walk. As many participants said, it’s life-changing. Completing my Bronze DofE Award has taught me that the challenges and pain you face along the way are only temporary, the success and achievement last a lifetime! It has shaped me as a more confident person. Memorable adventures and life-long friendships were made through the expedition walk.

Although camping for 2 nights and walking for 3 days with an extremely heavy and massive rucksack almost made me want to give up, my friends were always there to support and push me to finish this challenging but new journey in my life. As my groupmate, Augustine always said,” We came prepared, so nothing can stop us but ourselves.” I am really glad that I can take part in this unforgettable and meaningful journey with my friends.

Featured below is what fellow Silver DofE participant, Anna, had to say about going through those sweet and bitter moments in the DofE Silver practice walk from 13/10 – 15/10.

I had a very nice Silver DofE practice expedition last weekend from 13th to 15th October – Friday to Sunday. There were seven people in my group: Myself, Wenxiu, Helen, Sam, Augustine, Mild and Carla. We were accompanied by some teachers each day.

The first day was the easiest of all as the routes were easy, so we got to the campsite quite early because we didn’t get lost – though the weather wasn’t very good because it was raining and windy. In the evening I decided to do my biology revision in preparation for a test the very next Monday. We had a very nice sleep that night because we were all exhausted from climbing up a couple of steep hills in the morning.

The second day was the best of all. The weather was rather cool. We were all excited to do our second day of walking so we were chatting along while walking and I even started to sing with some of my friends which made for a good mood! The only downside was that sometimes we forgot to check the route regularly (as we were too busy singing) and we went to the wrong direction, without realising for ages. In fact, we ended up walking an extra 3km, and we got to the campsite pretty late.

There was also a bit of disaster going on with our rice-cooking at night. The rice was sort of burnt and stuck to the pan because we hadn’t put enough water in… And it took ages for us to get rid of the solidified burn marks on the pan! However, we roasted some marshmallows over the gas cooker and it was great fun. Also, there were so many stars in the sky – I couldn’t even resist watching them! We could see the Milky Way and I was so amazed by it… We simply rested on the ground together and watched the stars in silence, and for the first time I realised everything was so quiet around us… and that’s how it’s like to live surrounded by nature.

The third day was the last day of our journey. I could feel the pain in my feet, legs, my back and my shoulders. We set off quite early as we were all keen to get back to school. However, we were walking very slowly in the morning because we still needed to develop our navigation skills after waking up early. We had to make sure that we knew exactly where we were going so that we wouldn’t get lost again. Mr Tilson suggested a very good technique about navigation, which is having your aim of the next 200m, and when you achieve it, set up the next goal. Short term goals are easier to achieve.

We started speeding up our pace after lunch, but as predicted we made some mistakes and we got a bit lost which wasted all the time we saved from walking fast in the first place. It was quite late (5:30pm) when we got to the second-to-last check point, so the teachers agreed to pick us up and drive us straight back to Concord. Everyone was happy after all because we finally finished our three-day-expedition, and to be honest, I really enjoyed it!

Upon reflection, I have learned a lot from the expedition. Firstly, I have developed navigation skills – I think that we wouldn’t get lost again in our actual expedition and I hope we will be faster too. Secondly, I made some new friends.  Four of the members of my group who I had not known before are now friends with me because we talked a lot during the expedition. Thirdly, I had a lot of fun during the camping itself. I learned how to cook better, set up tents quicker and overall, become more organised… because in DofE I have to carry literally everything I need with me, in order to survive. Now I have a more comprehensive idea about how to live as a person in such environments, surrounded by the great nature.

The Silver Duke of Edinburgh expedition was a great experience for me. We spent three days camping in the wild and walked across the landscape of Wales. We walked for over 30 km, it was tiring but fun indeed.

There are 6 members in my group and each of us was given chance of navigation, which we find the subtle routes marked on the map and visualise it in our actual surroundings. I tried navigating and was one of the best navigators in the group. But most of the time I wouldn’t bother and would talk with my friends on politics and philosophy instead.

We walked through fields mostly of open meadow but sometimes we could find some cows and sheep. They were all quite friendly and some of them greeted us with their gazes as we pass by. However, there are few terrifying situations which cannot be ignored. For example, we happened to walk through a farm with angry bulls. Thankfully they didn’t attack us and we quickly ran away.

Being at the camp site at night is a remarkable part of the expedition, we were able to eat our food while enjoying the clear night sky. There was little supervision of teachers so we were able to talk about things that were not usually talked in schools. Though at night it was cold we got comprehensive enough equipment to keep us warm. We had hot showers available in both nights and at the second night we were able to set up a camp fire! 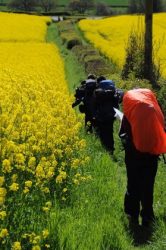 Duke of Edinburgh Training in the Wild

On Saturday 11th, as a member of the Silver Duke of Edinburgh group I set out into the Shropshire Hills for a day of navigation training. We were split into two groups and given the task of finding our way through the countryside using just a map and compass through the snow and fog while carrying emergency equipment and tour food supplies for the day.

I learned new aspects of navigation such as hand-railing, taking bearings from a fixed point and spotting tick-off features, which allowed me to find my way even when away from a footpath. We walked through the wilderness covered with heather, using compass and river to find our way.

We were wet and tired when they finally got back to the minibus at the end of the day, but there was still time spare to make a snowman before we left!