“Come on, stop asking for red packets. Come to the table now, the dishes are getting cold!” I can still clearly picture the scene – my mother gathering all the members of my family, when we celebrate the Lunar New Year together back at home in China.

As we all know, within China, traditions of celebrating the Chinese New Year vary from place to place. However, the most important custom has to be the occasional gathering of families for the annual reunion dinner. Families will clean their houses thoroughly in order to sweep away any ‘bad fortune’ at the start of the year. Windows and doors are well decorated with red paper-cuts and couplets too.

I had never thought about having such a memorable New Year celebration here in the UK with my best friends, until I actually attended it with Concord. I heard my classmates discussing the exciting New Year dinner hosted last year and thought it must be a good chance to experience Chinese New Year in the UK. So, I signed up for the trip as soon as the poster was put up in Main Hall with my friends.

We all arrived at the restaurant on time and waited for the dishes to be served. “I hope you guys will enjoy the delicious food! We are going to do a lottery in a minute, presents and red packets will be given to the lucky tables. We wish you all the best in 2019!” The food served was traditional Chinese food which really brought up some great memories of mine. Everyone was desperate to share the interesting things that happened in the previous year, as well as the personal goals they made for the coming year. You could easily tell the mood just by looking at the big smiles appearing on everyone’s faces!

I truly want to say thank you to all the members of the Chinese Society and the Concord staff who put a lot of effort into organising this absolutely extraordinary trip for us. I believe that the delicious food, the laughter, the happiness and all the well-wishes we received on that day will stay in our memories forever.

“The dinner was fantastic and the restaurant was great – even better than the one we went to last year. Thanks to the students and teachers for organising such great evening for us!” – Starry, F4

“I really enjoyed the day and the meal and I believe that everyone else did as well. We had a great time chatting and eating with our friends, even though our families were not around to celebrate with.” – Carolyn, F5

On 28th January, an extraordinary celebration dinner in Birmingham probably impressed and satisfied everyone who participated in it. Honestly, I thought this would end with the great dinner with lovely friends in my first year at Concord, but surprise is always coming later.

“I have good news! Chinese students, Ms McCormick wants you guys to come and talk about Chinese New Year to some kids in primary school, would you like to come?” asked Ms Correll. “They are between 4 and 6 years old, very little.”

Yeah, Work is not over yet.

“Hello everybody, we are students from Concord College, and it’s our pleasure to come here. In the next couple of minutes, we are going to tell you about the Chinese New Year.” I have to say we couldn’t hide our affection for those lovely kids. They were really little and were sitting on the ground, staring at our well-prepared clothing curiously with their wide eyes.

Our plan had two parts. The first one was to show them a presentation that was made by Yi-Yi and also a little play. We thought what could attract kids most must be interesting things, so that we introduced the red envelope, one of the customs from many generations. They were interested in if we really can keep the money and how much we received. It was funny to answer their questions as sometimes we didn’t know how to respond to them at first. Besides the red packet, Fiona talked about the food dumpling. “We put a coin in one particular dumpling, and it will be a lucky year for the person who choose it.” After introducing some customs, we did a play which was acted by Bowen, Tony, Sally and Fiona to tell a story of the origin of the Chinese Year. The story was about a monster, which was acted by Tony, a drama student. He perfectly exaggerated the role and made those kids concentrated. Everyone tried their best to perform and attract attention from the kids. It was so interesting and successful.

Afterwards we began the workshop. The kids became 3 groups and each group had 2 students who were responsible for each group of kids. Each group had thought about their activity and the aim was to teach them for about 6minutes and then rotate. Therefore, every child could learn about different skills. Tony and Karina were teaching them Chinese calligraphy, Yi-Yi and Bowen were teaching them pronunciation and words, Sally and Fiona were teaching them dancing. Without a doubt, making them curious about what you do and being a teacher was an unforgettable experience, especially as during the process we interact with them emotionally, with kindness and marvellous feelings. We enjoyed it as we not only spread our country’s culture to let more and more people know and love it, but we were also proud of ourselves, having such nice skills to show them and having great fun together. In terms of calligraphy, most children didn’t know people in other countries had a different tool to write instead of a pen or pencil. We showed them the writing brush and typical ink and let them touch and smell them. Luckily, they expressed their interest, so after demonstrating them how to write it, we also let them have a go themselves and a nice experience as well.

We all brought happiness to each other. As we left we all received a “high five” and sweet hugs. Unquestionably, this experience was worthwhile and we hope there will be more opportunities that can be provided for us to visit and interact with the children in the future.

The children in the primary school were really cute. I went there not just to finish the task my teacher assigned me, but I was trying to let more children become aware and interested in our Chinese culture. Thanks to all the teachers that have recommended me and gave me this opportunity!

The Chinese New Year dinner was fascinating. We departed from the school early in the morning and took a coach heading towards Birmingham. The bus ride was filled with excitement and never-ending laughter.

As soon as we arrived, we split into multiple groups and wandered around the vast city of Birmingham, many went directly to China town, immediately settling down at shops and restaurants, the most popular being Wagamama, with a staggering queue behind it that seemed to go on for hours.

As the city approached night, the streetlights shone vigorously, keeping the city alive. The students gathered around the China Court restaurant at 6pm and one inside sat in groups of 10 to 11 people. The students settled down and listened to an opening speech by Charles, introducing the prizes and lucky draws that would take place shortly after the dinner. Following the speech, several large plates of Asian delicacies appeared out of thin air, including steamed fish, sweet and sour pork, roast pork, duck, goose and more. The food continued on coming for 2 hours, each dish being devoured quickly.

At last, we ended the night with an excellent closing speech by Mrs. Coward and we headed back to the coach for the ride back to Concord. This was definitely a night to remember.

On the 1st February 2014, over a 150 Concordians went to Birmingham to celebrate Chinese New Year.

We set off at 1:30 pm and spent a lovely 3 hours shopping in Bullring shopping centre. It was a trip for us to have a chance to celebrate such an important event even if we are over a thousand miles away from home. Being away from home isn’t an easy job, but because of the atmosphere and all the international students, we’re all able to feel more at home and not miss out on events such as Chinese New Year.

Celebrating Chinese New Year together has always been a tradition in my family, but since I won’t be able to celebrate at home for the next few years while I’m at Concord, I think having the Chinese and Hong Kong societies organize such an event is an excellent way make homesick students – like me, feel way better.

Although I admit that I am a shopaholic, I was actually more excited about the Chinese food we were going to have, which ended up tasting just as great as I expected. There were 13 courses, all of which we loved and reminded us greatly of home. Of course, being with family would have been ideal, but it is a whole new experience having Chinese New Year dinner with a bunch of close friends! I was also very surprised by the diversity of people at the dinner, there were Chinese, Brits, Russians, Kazakhs, Vietnamese, Malaysians, Singaporeans and many more!

I am sure everybody had a great time in Birmingham because I certainly did! 😀 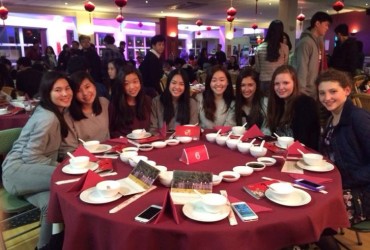