Murmurs of “Whoa, that’s so good,” were left lingering in the theatre while the different acts were on stage performing. The Talent Show 2014 evoked many different kinds of reactions from the audience. From ‘oohs’ to  ‘OH MY GOD HAHAHA’.  There were different types of performances ranging from dancing, singing and people showcasing their musical abilities. However, a surprise act from the Wrekin House boys to end the Talent Show was what kept the audiences laughing. Clad in suits, the boys sang to ‘Rude’ by Magic while expressing their frustrations about school (and of course, wanting to sit next to the high achieving 99.8% Ryan in tests…)

While all the acts performed superbly that night, the judges (Mr Kerslake, Dami and Emma) still had to pick the top three best acts of the night. It came as no surprise – to me at least – that Lisa Koh won that night for her acoustic cover of “I See Fire” by Ed Sheeran. Following closely behind, we have Joshua Mountford, who performed an amazing cello piece, which kept us on our toes due to the intensity of the song. Lastly, the amazing trio – Alisar, Mia and Chloe performed an astounding version of “All I Want” by Kodaline.  A special mention was also made to Greta who performed Rachmaninoff’s Prelude in C Minor beautifully on the piano.

Besides the performances, a whopping £455.40 was being raised that night. All proceeds will be split into 50:50 between a Women’s charity and the Xavier Project’s work in Uganda. It was truly a wonderful Saturday night and of course… 10:30 registrations.

Besides the Talent Show, which happened on a Saturday, the International Food Fayre also took place on Sunday. Societies like Hong Kong, Thailand, Singapore, Eastern European, Indian, International (a new society) whipped up their best local dishes and everyone just went around nipping on different finger foods or even having noodles from the Indonesia and Singapore society!

We all know how much we miss home cooked food. I’m not going to lie and say that I don’t get homesick from time to time but food that comes from home instantly makes me feel better!  Being able to have a taste of different people’s cultures and where they come from was fascinating. All of the foods tasted so different, yet so good in their own special way. Seeing people from the college come so close together for yet another event made me feel like I was at home with such a great community. It really was another amazing weekend! 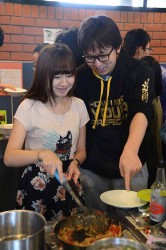 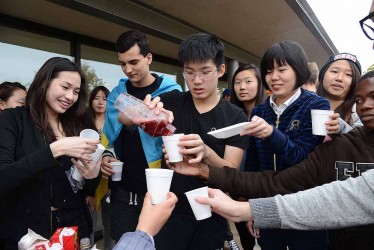