The second BTEC music charity concert of the year was held on 12 March; although the school is looking quieter than normal due to some students going back for Easter, it was an amazing show still.

The concert is for raising money for Soil of Amhara, a charity that aims to help the most disadvantaged children in Lalibela, Ethiopia, so, all of the money is going to good cause. I was fortunate enough to be the compere of the night, together with Izzy Outram. We had an amazing audience, cheering for the performers, even when there were some awkward technical errors, they still made the performers feel loved. And also, a big thank you for standing my terrible jokes on the night. (I get it, they’re bad)

The night was filled with so much diversity as well; we had band performances, then solo singers, piano duets, orchestral groups, dance groups, and even a Kung Fu performance. Everyone was so well-practiced and incredible. I must say the success of the show must be down to our music teacher, Miss Perrins, the technical staff, and the BTEC students. Hopefully, for any students who are leaving school soon, this will put them in high spirits before preparing for their End of Term Exams at home.

The BTEC Talent Show Concert was an amazing experience. The audience was very lively, regardless of who was on stage, people cheered and clapped for all the performers.

A magic showcase was the most memorable act of that day – I remember the disbelief on people’s faces and how in awe they were of the performer’s ability. The second half of the showcase held some of the best and most creative acts, with a dance ensemble standing out the most to me. It was well choreographed and planned, ending the night on a high note and leaving everyone with a rush of adrenaline.

When it was my group’s turn to perform I was very nervous, as this was my first time performing in front of large audience… My past experiences were limited to a maximum of 20 people. I was very worried about messing up the notes and forgetting what to play. However, when I got onto the stage, heard the cheers and looked over at my friends, I remembered what this was about – having fun. It didn’t matter if I messed up or forgot a note, this was my experience and having fun and enjoying the moment was the most important thing. It was an exhilarating experience and I would do it again if given the chance.

There was an assortment of biscuits and confectionary provided for the performers and the audience, which were all hand-baked by the BTEC group and all the profits made were donated to the chosen charity organisation, Blood Bikes.

Thank you to the BTEC group for organising such a memorable night.

Before the ‘Forever Friends’ Concert

On 15th March 2018 the Form 4 BTEC Music group will be hosting a charity concert in support of the inspirational charity Blue Cross. This charity helps both people and animals alike, providing home and healthcare for injured and abandoned pets all across the UK, and training service animals for terminally ill patients. We strongly believe that this incredible charity deserves our support, hence why we are hosting the ‘Forever Friends’ charity concert in their name.

In preparation for this evening (that we personally anticipate to be an ‘award winning’ night), our team has been working hard planning assemblies and ticket sales. After many thorough meetings we believe we have organised a night that will rival past concerts. Part of this complex but exciting planning period was filled with auditions for performers and musicians. All I can say is we were not prepared for the level of talent presented to us. The brilliant variety of musical pieces left our judges stunned and impressed, but scared of the decisions they had to make regarding the schedule, due to limited time space on the night. The standards of the performances bestowed upon us an extremely difficult selection period. However, after several intense meetings, we are confident to have assembled an exciting and beautiful range of performers who promise to make the evening a must-see event.

We anticipate that the ‘Forever Friends’ concert will not only prove to be a magnificent event, but a great way of relaxing before the upcoming examination period, that we all know can be a cause of stress for students – particularly those faced with the daunting GCSEs. This year, it’s a time where friends can come together to support their peers and enjoy a night of beautiful, exciting and moving music.

The concert will take place in the Theatre from 7:30pm – 9:30pm and is open to both students and parents.

1. The weather was predicted to be sunny all day long with a temperature of 27°

2. Saturday tests were coming to an end for the final term of the year.

3. The much awaited BTEC concert was coming up.

After a short but tiring term with the exams just around the corner everybody wanted to relax and clear their mind. What better way than going to the BTEC concert hosted by Form 4s. By paying £2, you could listen to some good music and also be content that you have donated this money toward Smile train Charity who help children around the world. Everybody was there on time with the audience including Form 4s, Form 3s and a few Form 5s. But the audience was mostly full of the 6.2s who wanted to relax and enjoy their last days at Concord.

The concert was hosted by Zhaslan and Kenneth who made the audience laugh and were enthusiastic and bubbly. The concert consisted of acts using just instruments, vocals and even a band. It started with Jacky (F3) who performed the piano version of Nocturne which put all our minds to the musical environment with the soothing music. Then, Brandy performed a single “Come back, Be Here”. This song got the whole audience listening and was so entertaining that most of the audience turned the torches on, on their phones and started waving them around (including me).

If I continue going on about this concert I think this would last about 5 pages… Cut it all into one word – this concert was FANTASTIC. Notable performances were Oleksandra (F3) who performed 3 pieces. Each pieces with its own style and each and every one was beautiful. But the act that got everyone on their feet clapping and waving was the final one, this was performed by the BTEC Form 4 class. They performed the song “Heal the World”. This song was brilliant because they had used a lot of singers, piano, guitar and the triangle. The act was so touching that suddenly I thought these guys would actually have been a good match for Michael Jackson. This stunning finale left the crowd speechless, and then they heard the bad news that the concert was over.

As we made our way out there was some good food being sold at a cheap price, again all the money going into charity. Everybody bought some food and walked out with a stomach full of Chloe’s “awsomazing” cupcakes and a relaxed mind. 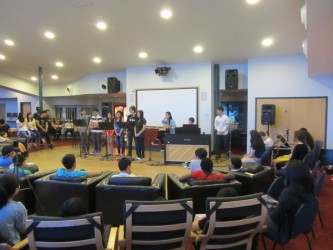 The Form 4 BTEC Level 2 music students are organising a Charity Concert in support of the Smile Train charity. This concert will portray the talents of the many skilled performers who are the college’s very own students. You will not only able be able to enjoy various musical performances, but also refreshment will also be sold throughout the evening in hope to raise more funds for the Smile Train charity. As highlighted in bold above, the concert will only be for an hour from 8:00pm – 9:00pm this Saturday evening. Despite the very important external exams that most Concord students are stressing about, we hope that you could see this event as some sort of a stress reliever. To all Concordians (including teachers), we highly encourage you to come join us for a fun-filled evening with a line-up of enjoyable music. Take a break from the books, and come join us for a relaxing evening.