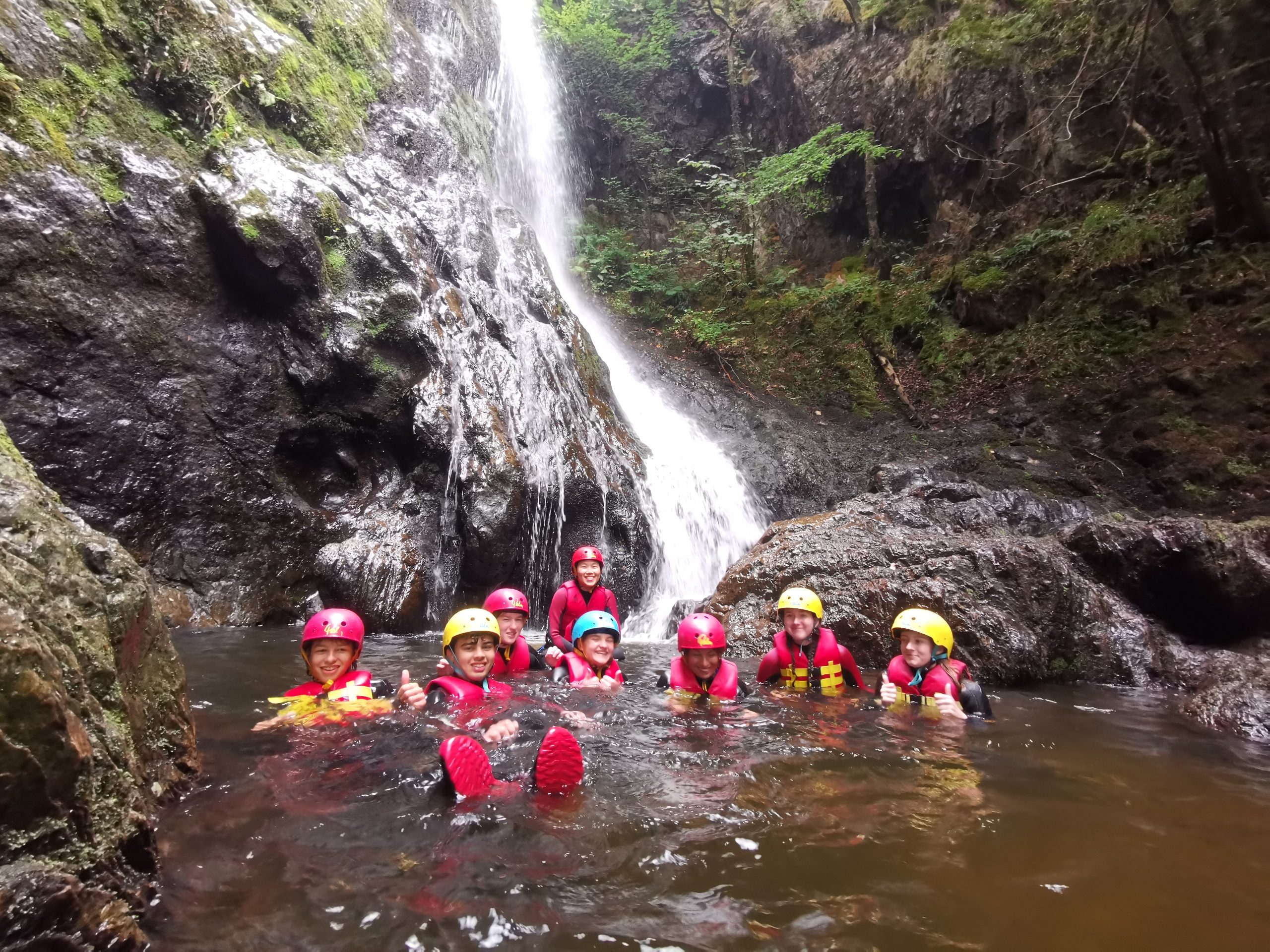 In August 2022, a small group of day students from F4 and F5 spent an action-packed 4 days in Snowdonia trying their hand at a range of exciting outdoor activities. Read about their adventures below! 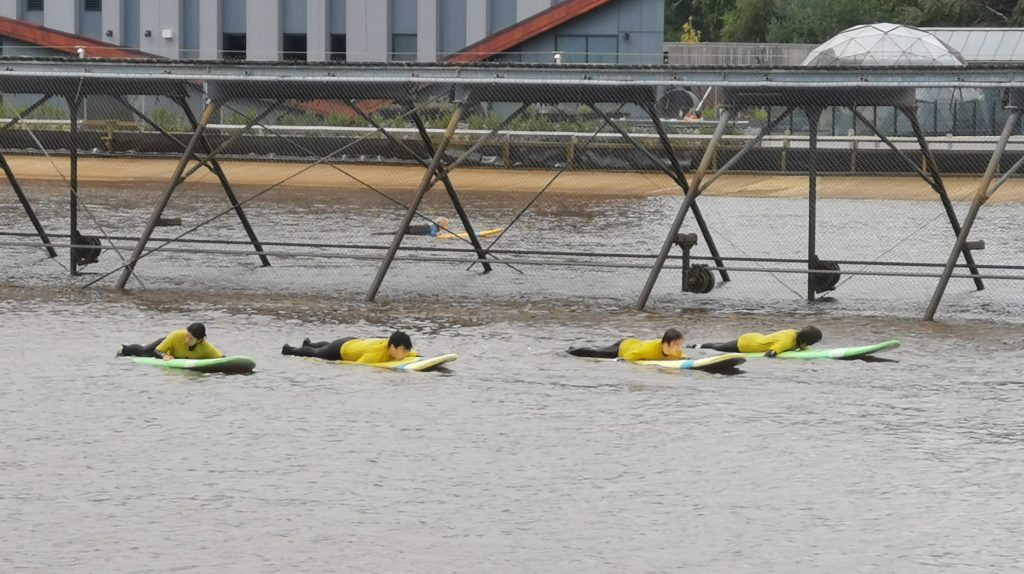 Surf Snowdonia was my favourite part of the trip. Starting with a quick practice on land which seemed pretty easy, this quickly got harder as soon as we got in the water. It was really fun especially bumping into others, being knocked off the board and falling into the water. We surfed many large waves and some of us managed to stand up, even for just 1 second (which counts as standing!), we had a lot of fun and we now think we are all professional surfers.

Along four peaks of the Nantlle Ridge. 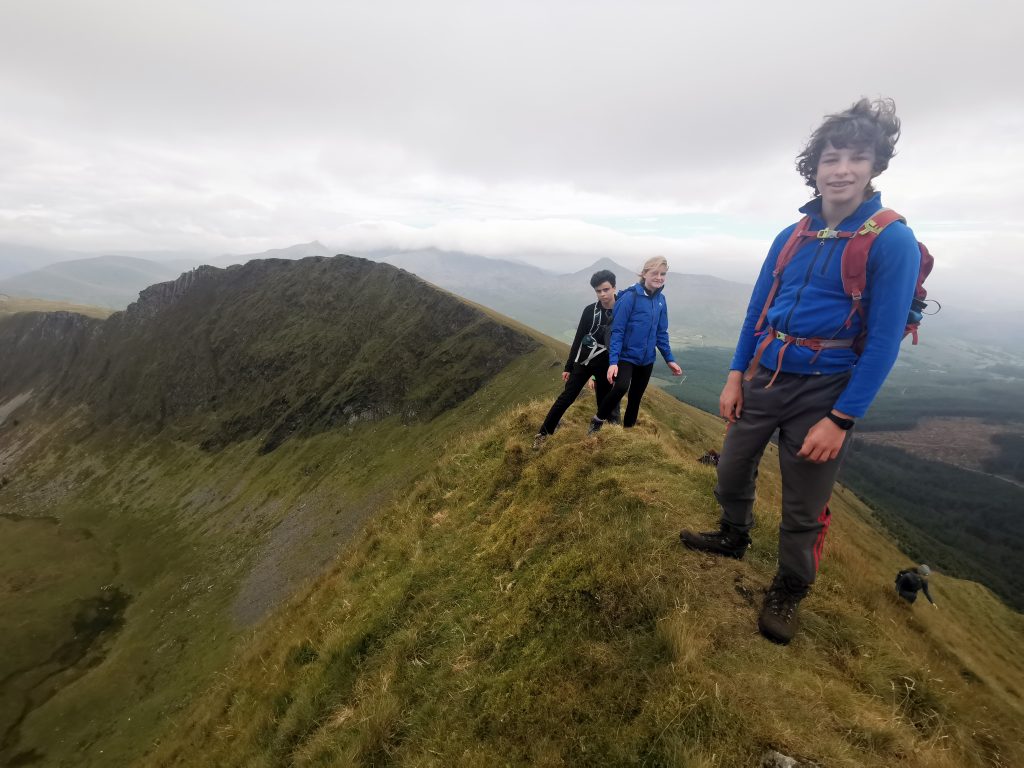 We started our walk in the early morning with our route beginning right at our accommodation. Soon after, we reached the bottom of Nantlle Ridge and with a few steep ascents ahead of us, we made our way up to the first peak. On our way up, some of us were even able to learn some rope skills from Mr Brown that were out to use in the gorge walking later in the week. For the 2nd peak, we were able to test our scrambling skills as we traversed across the route. This contained a myriad of rock types and routes as we balanced across some more wobbly stones and scrambled up some smoother slabs. On the 4th and final peak, a race was even made towards the stone tower with it being a short ten-minute walk away. Some of us did this in five-minutes on the way back as most started to run up the hill- this was of course shortly followed by heavy breaths and the need for water.

There were luckily only one or two light slips and tumbles on our descent- with the hills definitely wearing out our knees and ankles. To finish off the day, we made a quick drive to a local beach and spent some time in the ocean with the sun setting beside us.

Coasteering on the dramatic rock faces of the Range, West Anglesey. 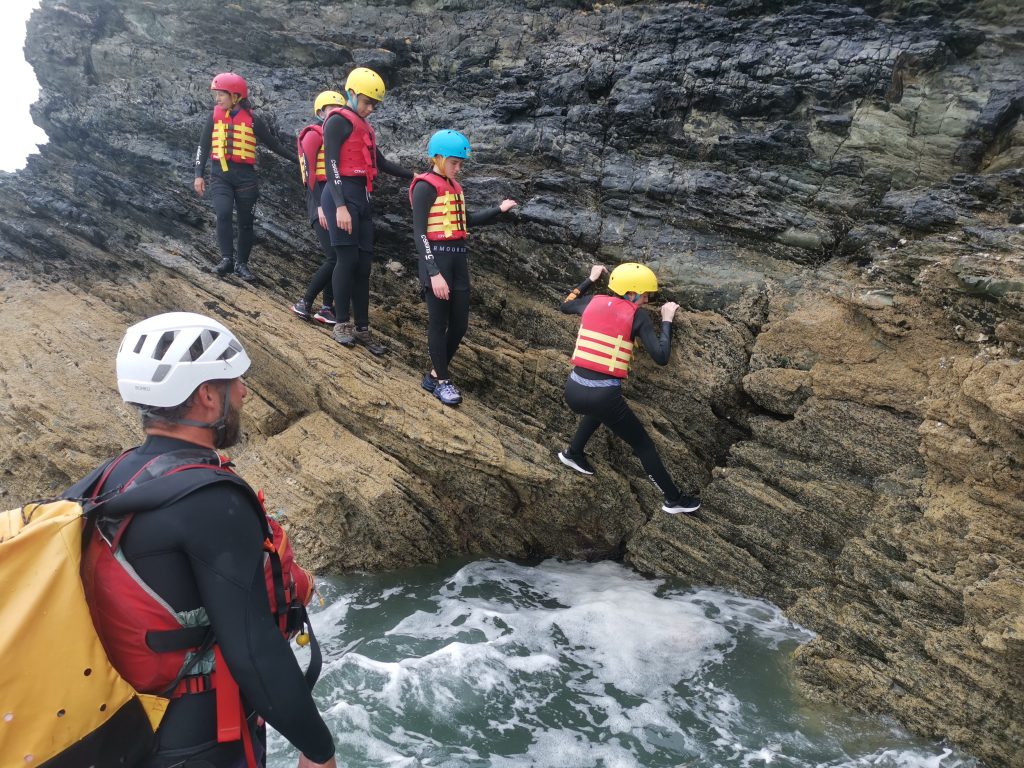 Coasteering, also known as the act of proving that barnacles are not good for your hands, is a journey along the shoreline that encompasses a healthy dose of throwing yourself into the sea and climbing across rocks. This is seasoned with a healthy amount of bobbing around at the mercy of the ocean and some doubt as to how you’re going to get out. When I described it to a friend, they responded that it sounded like voluntarily shipwrecking yourself, repeatedly, for fun.

To give a more direct account, we began by sorting wetsuits, buoyancy aids and helmets before heading to ‘The Range’ and, after a short walk, we headed through a passageway waist deep in water before beginning the journey of pulling ourselves out of the water, picking our way through the complex and rough rock formations that made up the coastline, then boldly hurling ourselves into the restless sea. Repeat that cycle a few times and add on the fact that Poseidon must have been having a bad day, summoning and terrific and somewhat alarming swell, and you have an exhilarating morning packed with memories.

Up the Afon Du Gorge. 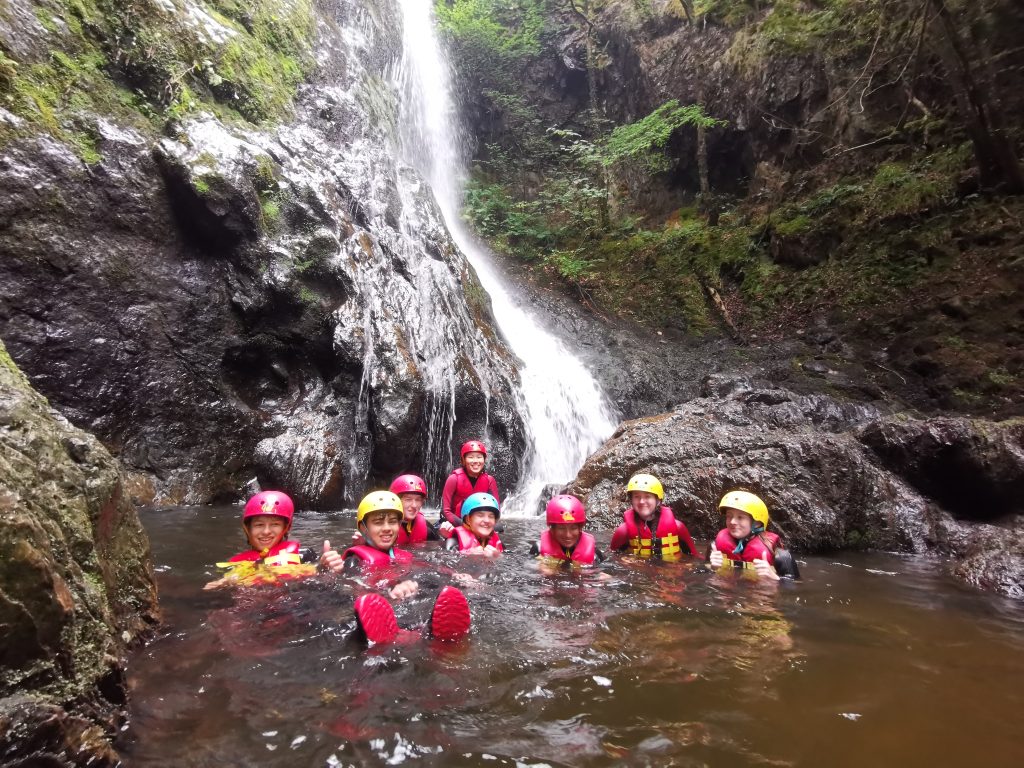 We started off at the bottom of the gorge that looked way too tropical to belong in the UK. On our way up, we slipped on rocks, scrambled up boulders of varying sizes and helped each other using ropes. We even squeezed our way through crevices like ‘the elephant’s bottom’, which is most definitely a questionable name.

Despite ending the day with one too many bruises, it was worth it- we got a free shower from the waterfalls, a few slides, and many chances to leap into pools of freezing cold water. 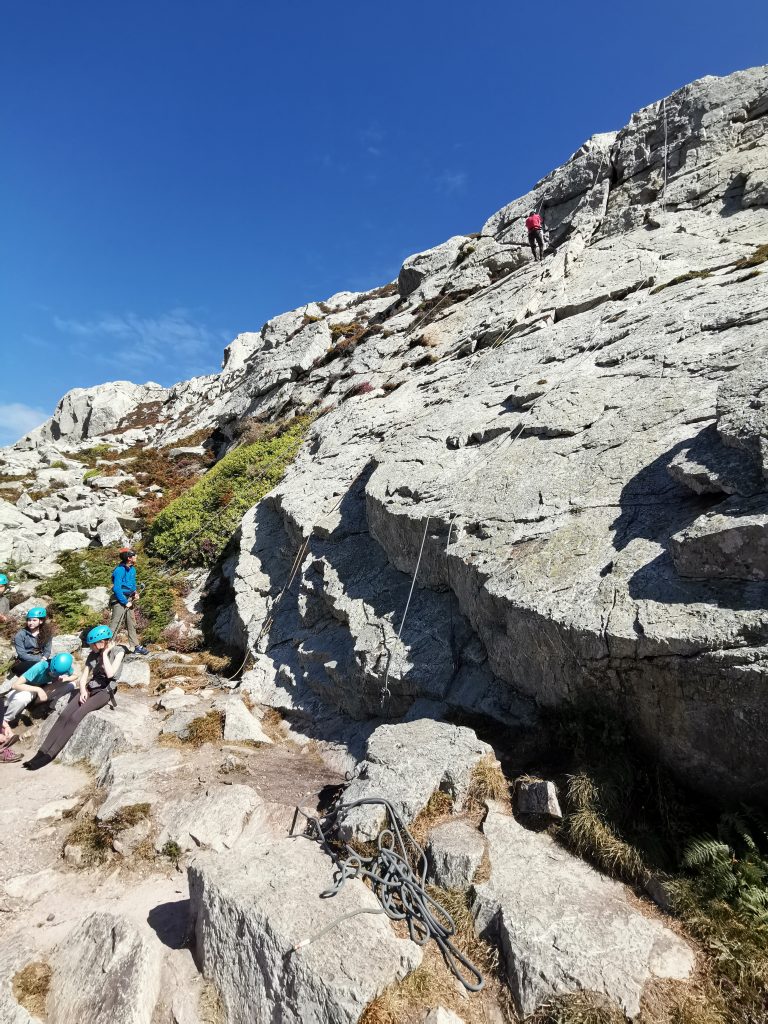 In the morning of day 4 the group walked up to Holyhead Mountain for an introduction to outdoor rock climbing on some lovely slab routes. The route started off gentle, before rearing up onto the vertical headwall. Everyone did brilliantly well and supported each other through encouragement and belaying. Thankfully the weather was warm and sunny so the rock remained dry!

Along the dramatic rock faces of the Range, West Anglesey. 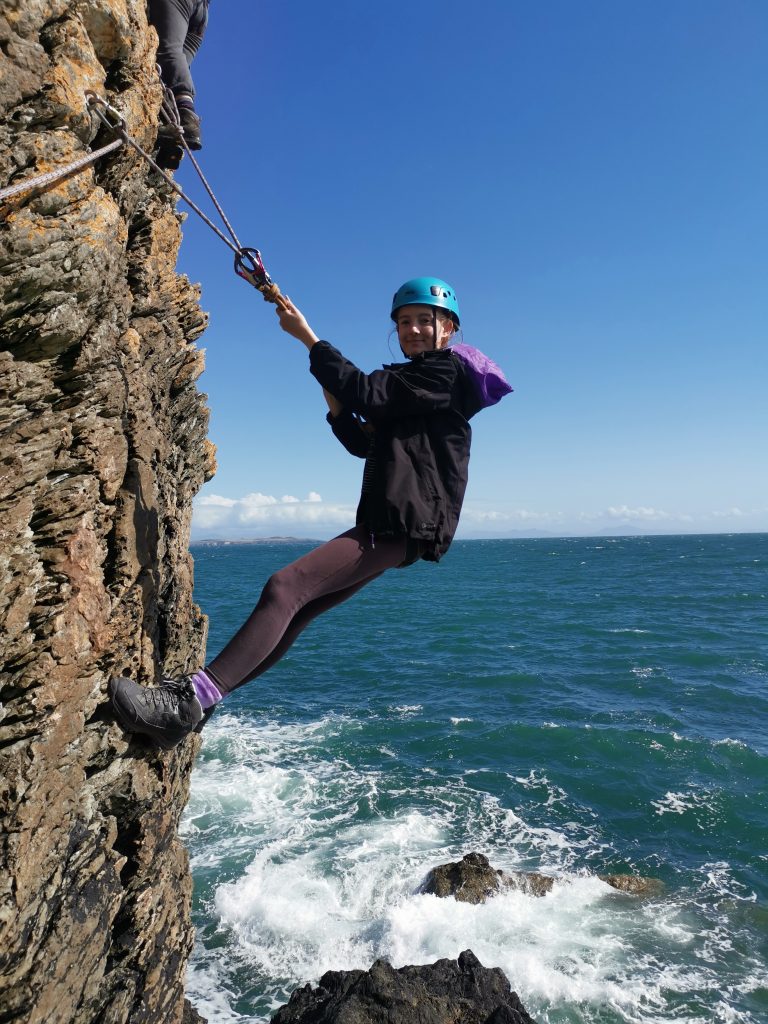 Sea level traversing can only be explained as a real test of nerve. It involves scrambling across the rocks to reach the dramatic sea cliff views. Fortunately, for the sake of ourselves and our parent’s we were attached to ropes to not fall when climbing the steepest sections up and around the barnacle covered rocks. To reach the next cliff, we had to harness ourselves to a rope bridge and slide over the crashing waves below. This was, to tell the truth, the hardest thing I’ve ever had to do. The carabiners kept getting stuck on the ropes! We then moved to a different course which was longer and a lot harder. We climbed down the rock and then up and then down again! The seawater kept crashing against our legs and if we didn’t have the ropes we would’ve fallen in. Afterwards we went to get ice-cream and sat on the beach to look at the infinite, ever-evolving sea. This activity was both a physical challenge and a thrill, and left us with a true feeling of accomplishment. 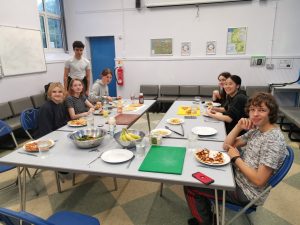 The bunkhouse had some surprising components, yet it also had many upsides. I enjoyed the food in particular, which was welcome after the very active days. I also enjoyed the mornings, which were very busy as people pre-prepared sandwiches, washed up and ate breakfast.