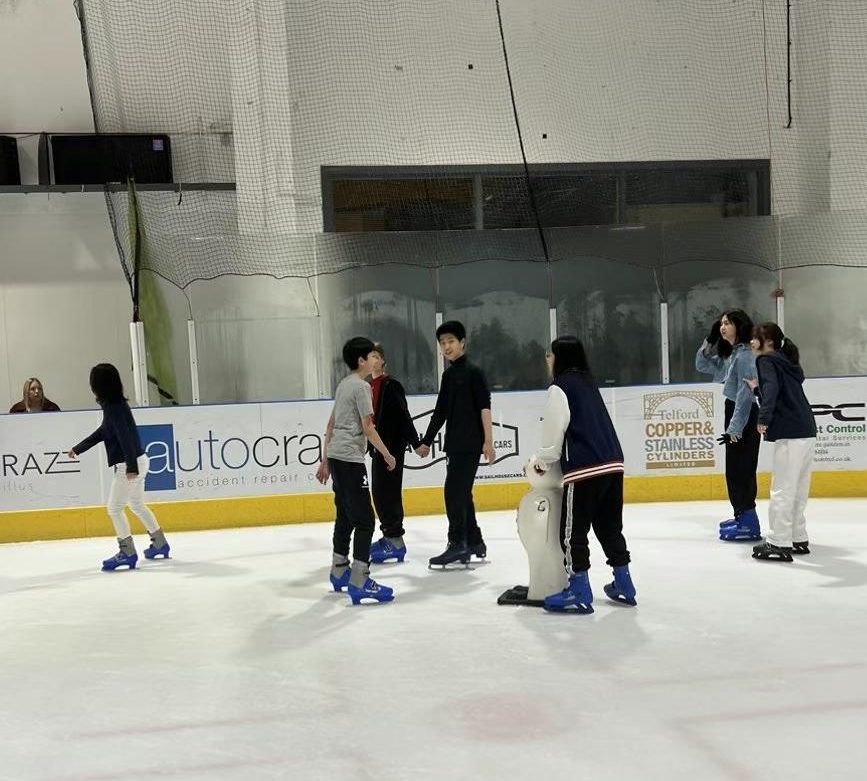 We began our half-term break by spending a day at Alderford Lake. It was quite chilly, especially in only a wetsuit and a lifejacket, but we managed to warm up from the range of water activities we were offered, including paddle boarding, kayaking, water biking, and canoeing. After an hour or two of exploring the lake, we eventually paddled, rowed, or biked back to the jetty to change back into warm and dry clothes and have lunch. Eating outside certainly had its merits – the scenery was quite enjoyable – but of course there were many incidents of a stray leaf finding its way into a cup of juice. After lunch, we were split into two groups and taken to the field next to the changing rooms. Amusingly, with a bang, a man burst out of the nearest stall and ordered us to put on an eye mask and a rough sack over our heads. We were marching across the field as a light drizzle began and sent us towards a lake to be ferried towards one of the lake’s many islands, where we made our way through an exciting, haunted maze. I especially enjoyed watching my friends hop high up in the air after getting jump scares. Eventually, we made it to another jetty, where we waited for our ride back to land. Despite being slightly damp, I thoroughly enjoyed the activities at the lake and wish to return someday, hopefully in a drier and warmer weather.

On Monday we travelled to the historic city of Chester for a walk to its extensive surviving Roman walls and to learn about historical medicine at the Sick to Death attraction. Our group went on the walk first, expecting a leisurely stroll around the city, but instead we were greeted with a Roman general who would introduce us into the Roman army! After putting down our bags and picking up a nicely decorated shield and a foam ‘sword’, we marched in pairs over to where the Chester city walls were to be drilled. I recalled distinctly how to form the testudo, a ‘shield wall’, which provided defence against arrows and other missile attacks, by covering ourselves in a formation similar to the shell of a turtle, but what was even more memorable was the stares we got from some of the public as we filed down the city streets with shields and embarrassed faces on full display. After this we were taken to the remains of an amphitheatre, where citizens were taught to abide by the law through displays of capital punishment to prisoners, who might for example be mauled by wild animals for the entertainment of the crowd. We eventually returned to pick up our bags again and proceeded towards Sick to Death, where the progression of medicine and medical care was shown through a series of exhibits with many surprisingly well-made gory models of intestines and various other paraphernalia on display. It was just about lunchtime when we finished the exhibition, and we were allowed to meander around in search of restaurants and cafes and do some shopping. My friends and I, determined to enjoy our rare instance eating out, headed straight to the nearest McDonald’s. Eventually at 3:30 we all met back near the carpark where the coach had stopped, and we returned to Concord after a long day of roaming the city.

We arrived at Telford in the morning and queued up for our ice-skating shoes. The rink was quite grand, and there was a lot of excitement amongst the crowds. Many classmates had skated in the past and were anticipating the challenge of getting back on the ice. For those who did not know how to skate, however, some teachers were around to help, so eventually everyone had fun. After that, we had a few hours to roam around Telford and shop with our friends. In particular, the bubble tea stall inside the mall was popular as well as quite a few clothes stores displaying the latest fashion. It was overall an extremely eventful day for everyone.

Two days after the ice-skating trip, everyone went to the cinema to see the movie ‘Black Adam’. At first, not everyone had high expectations because the movie was not that notable. However, we immediately all got into the mood of seeing an action film as soon as we brought in popcorns, nachos, chips and other snacks of all sorts. A whole room was reserved for us, so I was delighted when I realised that I was allowed to sit next to my best friends and share snacks with. The film had a decent number of comedic moments that left everyone laughing even in the days after the trip. It had also served as a nice stress reliever before the opening of the next half term.